McCain Gambles on Inexperienced Conservative [Aug 29] http://www.ft.com/cms/s/ The choice represented a bid by Mr McCain to win over disgruntled former supporters of Hillary Clinton, undercutting Democratic efforts during the convention to reunify the party. Ellen Malcolm, president of Emily's List, a pro-Democrat group that supports women candidates, challenged the notion that Ms Palin would appeal to former Clinton supporters. "McCain clearly sees the power of women voters in this election but has just as clearly failed to support any of the issues that they care about," she said, highlighting Ms Palin's support for overturning the Roe v Wade ruling that legalized abortion.

Did John McCain shoot himself in the foot with his VP choice? Big time. He was losing, and desperate, as the private polls his campaign had been taking revealed the gap between he and Obama to be far larger than the public polls reveal. Obama has energized voters, so that many young people and people of color have registered to vote. The count of new Democratic voters far outnumber new Republican voters, by a factor greater than 4 to 1. These new voters are not included in the polls of likely voters - those who voted in the past two presidential elections. Then there is the enthusiasm gap, where Democrats are more likely to make it to the polls in November. Given that the arguments the McCain camp were making were not making any headway against Obama, they were desperate for a game changer. Seeing the significant number of disgruntled Hillary fans making claims they would vote for McCain, this seemed like the largest voter block that could potentially be swung to McCain. So what is wrong with this choice?

First is that he has offended Hillary's strongest block - older women who had been discriminated against during their lifetime - and treated them like second class citizens. Standard fare, after not being given equal pay and opportunity for equal work, is being thrown over for a younger woman. McCain has already been branded for this tendency by his history of running out on his first wife, a former beauty queen who was crippled in a car accident. McCain then took up with Cindy, an unspoiled beauty. Now with the VP choice he has selected another beauty queen far younger than McCain. Regardless of all arguments, the element of being dismissive of women's true qualifications for office and choosing women only for their beauty, is obvious. This is intuitively obvious to the older women voters McCain hoped to attract. Standing next to McCain, Palin seemed like his mistress, a reminder of McCain's age and that his attitude toward women are from a different era. Obama has a wife who is a strong woman, competent and even earning more money than he at her day job. McCain now stands in contrast to Obama on this issue, and is losing on this issue to an extent not yet evident in the polls.

Second, McCain has gone beyond his tendency to surround himself with lobbyists and to be susceptible to money interests and plunged himself into a new and very fresh scandal - abuse of power. The Keating 5 scandal is in McCain's past, wherein he went to bat for Keating during the savings and loan crisis, trying to get regulators to go easy on his friend Keating. This is far enough in the past to be put aside by most voters, but what does his choice of Palin as VP say about his judgment and tendencies? She is embroiled in a controversy, an investigation, that could result in impeachment proceedings against her in Alaska. Without question she wanted to fire her former brother-in-law from his job as a state trooper and insisted, in person and through intermediaries, that this be done. This in and of itself would be considered a lightweight scandal in scandal-prone Alaska, but when she fired the highly competent head of the Department of Public Safety simply because he refused to do her bidding she crossed the line. This is not only criminal. This is grounds for impeachment and reflects badly on McCain's judgment. 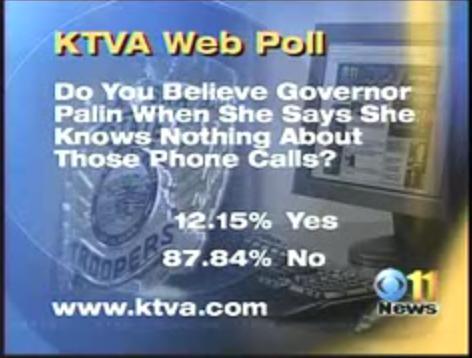 What is McCain Thinking? One Alaskan's Perspective.
August 29, 2008
http://mudflats.wordpress.com/2008/08/29/what-is-mccain-thinking-one-alaskans-perspective/
Sarah Palin's sister Molly married a guy named Mike Wooten who is an Alaska State Trooper. Mike and Molly had a rocky marriage. When the marriage broke up, there was a bitter custody fight that is still ongoing. During the custody investigation, all sorts of things were brought up about Wooten including the fact that he had illegally shot a moose (yes folks this is Alaska), driven drunk, and used a taser (on the test setting, he reminds us) on his 11-year old stepson, who supposedly had asked to see what it felt like. While Wooten has turned out to be a less than stellar figure, the fact that Palin's father accompanied him on the infamous moose hunt, and that many of the dozens of charges brought up by the Palin family happened long before they were ever reported smacked of desperate custody fight. Wooten's story is that he was basically stalked by the family.

After all this, Wooten was investigated and disciplined on two counts and allowed to kept his position with the troopers. Enter Walt Monegan, Palin's appointed new chief of the Department of Public Safety and head of the troopers. Monegan was beloved by the troopers, did a bang-up job with minimal funding and suddenly got axed. Palin was out of town and Monegan got "offered another job" (aka fired) with no explanation to Alaskans. Pressure was put on the governor to give details, because rumors started to swirl around the fact that the highly respected Monegan was fired because he refused to fire the aforementioned Mike Wooten. Palin vehemently denied ever talking to Monegan or pressuring Monegan in any way to fire Wooten, or that anyone on her staff did. Over the weeks it has come out that not only was pressure applied, there were literally dozens of conversations in which pressure was applied to fire him. Monegan has testified to this fact, spurring an ongoing investigation by the Alaska state legislature. But, before this investigation got underway, Palin sent the Alaska State Attorney General out to do some investigative work of his own so she could find out in advance what the real investigation was going to find. (No, I'm not making this up). The AG interviewed several people, unbeknownst to the actual appointed investigator or the Legislature! Palin's investigation of herself uncovered a recorded phone call retained by the Alaska State Troopers from Frank Bailey, a Palin underling, putting pressure on a trooper about the Wooten non-firing. Todd Palin (governor's husband) even talked to Monegan himself in Palin's office while she was away. Bailey is now on paid administrative leave.

As if this weren't enough, Monegan's appointed replacement Chuck Kopp, turns out to have been the center of his own little scandal. He received a letter of reprimand and was reassigned after sexual harrassment allegations by a former coworker who didn't like all the unwanted kissing and hugging in the office. Was he vetted? Obviously not. When he was questioned about all this, his comment was that no one had asked him and he thought they all knew. Kopp, defiant, still claimed to have done nothing wrong and said to the press that there was no way he was stepping down from his new position. Twenty four hours later, he stepped down. Later it was uncovered that he received a $10,000 severance package for his two weeks on the job from Palin. Monegan got nothing.