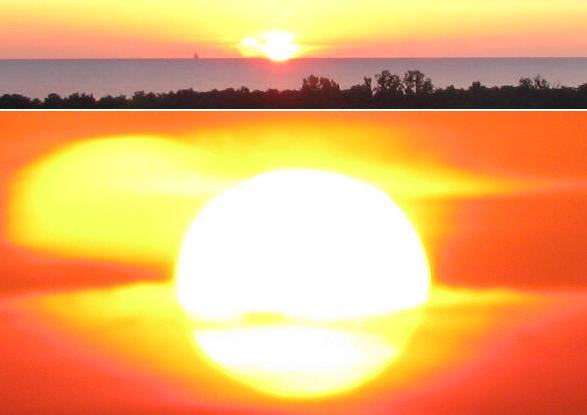 A Triple Sunrise Over Gdansk Bay [Aug 4] http://apod.nasa.gov/apod/ap090804.html Explanation: How can the same Sun rise three times? Last month on Friday, 2009 July 10, a spectacular triple sunrise was photographed at about 4:30 am over Gdansk Bay in Gdansk, Poland. Clearly, our Sun rises only once. Some optical effect is creating at least two mirages of the Sun -- but which effect? In the vast majority of similarly reported cases, mirages of the brightest object in the frame can be traced to reflections internal to the camera taking the images. Still, the above image is intriguing because a sincere photographer claims the effect was visible to the unaided eye, and because the photographer took several other frames that show variants of the same effect.

This is an atmospheric phenomena caused indirectly by the presence of Planet X, what we have in the past called the Monster Sun phenomena. When genuine Second Sun sightings occur light is bouncing off the immense dust cloud that shrouds Planet X, bouncing at an angle such that the light goes from the Sun to the cloud thence to Earth. A double reflection can occur during such times where the light going to Earth would not be directly into the viewers eyes, but hit water and ice in the atmosphere bouncing yet again at a tangental angle into a viewers eyes. This is what was occurring in the Poland snaps, and yes the photographer saw this naked eye as reported.

A Video http://www.youtube.com/watch?v=97vfBoJLaB8 made in Padua, Italy, on August 24, 2009, at dusk. http://www.nibiru2012.it/nibiru-2012/video-padova-filmato-secondo-sole-24-agosto-2009.html [and from another] Hello everyone fom Fabrizio creator of the video in Padua! I've said previously for my other videos and I repeat once again: to me to be here mingling with Photoshop or anything like that plus I do not even know what they are and how to use them, losing hours to make fake videos to put on You Tube does not interest me at all! I was coming home from work, intrigued by the Sun which was slightly elongated on the right side and I stopped focusing with the camera on the elongation which turned out to be a second small circle! It is a video made in 2 minutes, downloaded to PC via Blue Tooth and on the internet, there are no fake trees made of cardboard or just pixeled Sun or anything else, maybe on a photo I could do it but not on a video for sure, plus I wanted to put music but I didn't even managed to do that! So, if what I filmed is Nibiru, Planet X, the Sun, Mercury, Venus or Mars I don't know. The fact is that the video is true, not modified or anything like that!! [and from another] Other moon swirl examples from the past, 2003-2005, from China, Italy, and New York

This video is not a valid capture of Planet X, the Second Sun. It has no obvious flaws, though the quality is poor so details are hard to make out. The Ecliptic plunges from upper left to lower right in Italy at dusk, putting this theoretical Planet X above the Ecliptic and not to the right of the Sun along the Ecliptic as it currently rides. Even allowing for light rays bending to put a placement at a distance, this is too extreme. Then what is it? What could cause an elongated Sun viewed by naked eye, and dual orbs when captured on camera? When Planet X first arrived in the inner solar system in 2003, many of the photos were of the moon swirls, which form long tubes when seen from the side. These tubes focus light bouncing down the tube such that they appear as light orbs when the tube is turned toward the viewer. This focused light, coming down along a moon swirl tube, can be significant and mistaken for the shrouded Planet X corpus itself.