ZetaTalk: Blue Clues
written May 4, 2010 on the GodlikeProduction live chat.

Venus is notably bright and huge in the western sky after sunset, as photos taken of this planet show, but why is it also appearing to be blue in a set of photos taken from Illinois on May 2, 2010 at 9:20 pm? This is the signature of the Dark Twin, which is a black hunk of rock which only reflects some blue and yellow light? The color is unmistakable, and color inversion shows the opposite of this pale blue, a pale pink, to be the dominant color. The location of the planet appears to be where Venus is expected, at Azimuth 292 Altitude 8, and the photographer reported he saw this in the NW sky. So is this Venus, looming close, or the Dark Twin? These snips below are from the photos are the actual size seen in the sky, as the photographer was not zooming his view!

Here is the blue Venus in the five photos, zoomed 600%, brightened, and color inverted to show the dominant colors.

It is both, and thus the situation is confused. Venus casts light, and the Dark Twin adds to the hue. There is an astrophysics term called blooming, which means that light which passes by another gravity object pulls toward it, and thus the light emitted or reflected by that gravity object is increased. This is Venus, with light from the Dark Twin in the near vicinity pulled toward it, and thus the confusing picture of what looks like a tail, or swirling debris, around Venus. Does this mean that Venus and the Dark Twin are in line of sight with each other? The Dark Twin is behind the Earth, on the darkside of the Earth, outside of their shared orbit in an attempt to evade the Earth and to keep them from colliding. Having come up behind the Earth in their shared orbit, it is thus to the left of the Earth. Venus is in the cup, sunside of the Earth and also to the left of the Earth at this time though much closer than assumed. So these two planets are nowhere near each other. The light causing the blooming effect is sunlight that has bounced off the Dark Twin and returned almost directly toward the Sun, encountering Venus on the way. This light bends sharply due to the gravity of Venus, thus turning toward Earth. If you think this single happenstance is interesting, just wait! Things are going to get very interesting! 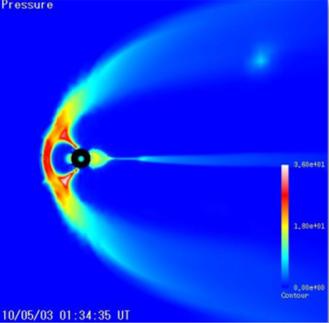 All the data for the magnetosphere simulation is gathered by the ACE satellite, which stands between the Earth and Sun (kind of like the SOHO satellites). Since it can look above the Earth and assume this is the Earth N Pole emissions (blue lines), and below the Earth and assume this is the S Pole intake (red lines) then that orb with an + is something perceived northish of the Earth! This could very well be the Dark Twin's field! Remember, this is a 2D representation of what is on the northish side of the Earth, and the last photo of any Dark Twin effects had the blue light from the Dark Twin blooming Venus, all of this just slightly above the Ecliptic (northish). A 2D image goes not specify depth. Thus, the Dark Twin field could be much to the side of the Earth. [and from another] About Real-Time Magnetosphere Simulation http://www2.nict.go.jp/y/y223/simulation/realtime/research_e.html#aboutRealTimeM The real-time magnetosphere simulation is carried out using the MHD code developed by Prof. Tanaka. Input parameters are taken from the real-time solar wind and interplanetary magnetic field data observed routinely by the ACE satellite. Simulation results are visualized in real time. Note all of the plots here are based on the preliminary data (ACE Real Time Data), which have not been processed yet. (Press right panel to get the explanation of real-time magnetosphere simulation results (LatestImage))[and from another] From Satellites: ACE Satellite http://son.nasa.gov/tass/magnetosphere/sat_ace.htm The ACE satellite is positioned about 1 million miles from Earth, and is always directly between Earth and the Sun.

All planetary bodies of whatever size will have some magnetic field, because magnetons are everywhere and a very restless particle. The Dark Twin does not have a liquid core, but at one time did have this, as all planets coalescing from a Big Bang are first gaseous, then liquid, and then finally solidifying as they cool down. Is the magnetosphere simulator reflecting this slight field from the Dark Twin, which is as large as the Earth? Yes. Yet more proof on how very close to the Earth this twin is, as the ACE satellite is taking an Earth perspective on measuring space weather, and does not go all that broad. It is right next door!