There are said new sightings, by lots of people on GLP, of a new said comet, which is said to be coming towards Earth. Do you have any information, on this phenomenon and if so, could you share an information stop, at GLP with some of us, on this new information, please?

What would happen if the Earth, backing up from Planet X which is coming at Earth in a virtual head-on orbit, reversed orbit?

How does the common man, given this confusing situation, sort out the truth of the matter? Fortunately, we have comets! When discovered, their orbits ascertained and computed, comets C/2001 Q4 and C/2002 T7 were declared to arrive at perihelion in May, 2004, and certainly not visible naked eye prior to that time, if ever! So what is it the common man is seeing, in droves, in the sky just after sunset! It moved, has a tail, and is in their face astonishing them! Comets come early, because the orbit of Earth has backed into them. Comets orbit the Sun in the same counterclockwise motion that the planets assume in their orbits. Thus, the May perihelion dates assumed an Earth running ahead of the comets, the comets needing this time to catch up to the Earth in her orbit. Earth stopped, reversed, and the dates have arrived early! How early?

Assume a halted and reversed orbit, so that by the reports on Feb 3 this has occurred for 6 weeks. Assume the comets not affected by Planet X, as they are too tiny to invoke the Repulsion Force of gravity. They rush forward, Earth rushes back, 6 weeks for them, 6 weeks backwards for the Earth, a total of 3 months. Does this not compute, on Feb 3, to a May date? Here, for man, dazed in the disinformation as the only fare given to him, a way to determine for himself the truth of the matter. Earth has halted, and reversed, because her bully brother Planet X is coming at her! 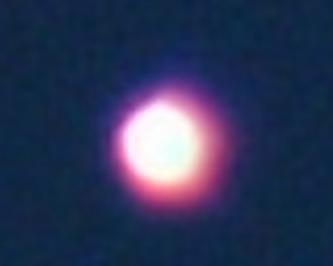 I took this pictures in Cascavel, Parana South Brazil on Feb 3 at 8:00 PM (summertime). At the time the sun still in the horizon (bottom photo) but I could saw this star, then I shot these 3 photos, the light from it was so strong I could saw even in day light. Its light was stronger than moon or any planets or stars at the moment. We observe this object is already in the solar system because his mass is visible, its not a point of light. We could see its ethereal mass. Another detail. we have observed in the telescope or in the photographic camera (1000mm) his movement in the sky was 60% faster than any star, moon or planet. I took a chronometer to take the time, these start took 2.50 minutes to cross the photographic frame (pentaprism).
Sergio

Spaceweather News for Feb. 15, 2004
Comet C/2002 T7 (LINEAR) is approaching Earth and brightening every day. It´s not yet a naked-eye object, but the 7th-magnitude fuzzball is easy to see through backyard telescopes. The comet lies not far from brilliant Venus in the western sky after sunset. For the next three months, the comet will continue to brighten as it nears Earth. May 19th is the date of closest approach (0.27 AU). At that time C/2002 T7 might glow brighter than a 1st magnitude star--easily seen with the unaided eye.
Feb 15 NASA Report:
Explanation: A newly discovered comet may outshine most stars in the sky by May. Designated Comet C/2002 T7 (LINEAR), the comet was discovered in 2002 October by project LINEAR. Many reports already place the comet as brighter than magnitude 7, meaning that it can now be seen with binoculars. Reports also indicate the comet already has a visible tail nearly the length of a full Moon. Since predicting the future brightness of comets is a very tricky business, there remains the possibility that T7 might never become visible to the unaided eye. Alternatively, another comet, C/2001 Q4 (NEAT), may also reach naked eye visibility at nearly the same time, making 2004 April and May two of the busiest bright-comet months in centuries. Comet T7 can be seen on the above right on January 20, while an airplane trail is visible on the left.

T7 LINEAR
As 2003 came to a close, several predictions were offered as to how bright the comet would become during May of 2004. ... perihelion in late April, 2004’
Q4 NEAT
The potential for a bright comet show for the spring of 2004 is based on an improved orbit that places the new comet NEAT’s closest point to the Sun, or perihelion, at a distance of 89.4 million miles (143.9 million kilometers) on May 15, 2004.