Australia will be in a good and bad situation re the pole shift. The western 2/3 will go suddenly under water, due to the plate shared with Indian sliding under the Himalayas. However, the eastern 1/3 along with New Zealand will benefit from this, raising slightly out of the water, gaining land above where the melting ice caps will place sea level within two years after the pole shift. The eastern half of Australia and New Zealand benefit from this plate movement, lifting up as India is plunged under the Himalayas. Thus, even with the rising seas from melting poles, the mountains in eastern Australia and New Zealand will afford safe living areas. Due to its attachment to the plate including India, the continent of Australia will both suffer and benefit from the coming pole shift. During those moments when the Earth's crust stops moving, after having been dragged along with the core during the pole shift, the western half of Australia will suddenly go under the waves. This will seem, to the stunned residents, as though a tidal wave were steadily moving inland, and where the crest of the wave will not at first be high, the waters will just keep rising until all not afloat are drown. Those in boats may survive, though there is risk of capsizing, and they will find themselves out at sea and the washing about that will occur afterwards.

Australia should not be worried about volcanoes, as it does not have any volcanoes active within the last 10,000 years in this vicinity. New Zealand has them because it is on an active fault line, but Australia does not. Certainly the Australian artesian basin will be affected by the Earth changes, and well before the tipping of the Indo-Australian Plate during the hour of the pole shift. We have mentioned that plates being raised will often bend at the point where they are rising up from ground level, and thus losing the support they used to enjoy. For Australia this breaking point occurs 1/3 of the way across the continent from the eastern shore. East of that point it is rising from the magma, and west of that point being pushed down into the magma so the plate can plunge under the Himalayas. Thus, the bending point is right in the middle of your artesian basin. This puts pressure on the water pool, so presumably it would tend to spurt out any tap, but also breaks the rock giving it access to escape. Overall, you will not lose your ground water, but there may be much flux during the times leading into the shift, as well as for many years afterwards. Plan for times when the water table seems to be dropping, but do not expect such times to last for long.

We have described the plunging of the western 2/3 of Australia as quite dramatic and steep. Meanwhile the eastern part levels off due to a bending of the plate through the center of Australia. This can almost be seen if one looks at a relief map of Australia, as the lowlands of Australia, where the bending occurs, are between the eastern and western mountain ranges. But there is more than a bending though the center of Australia. Some consider the Indo-Australian Plate to be two plates, one holding India, the other Australia, though they both operate as one. The reason for this theory is fault lines though the center, which can be seen on undersea relief maps. The eastern part of the Indo-Australian Plate will be raised, including New Zealand and eastern Australia. This is heavy lifting, and more than mere bending in the center of Australia can alleviate. As the plate is hammered under the Himalayas, there is pressure on these fault lines to bend, and bend they do in such a way as to drop that portion of the plate sliding under India sharply. This causes that portion of the plate holding western Australia to rise from that drop point at a steeper angle, but when the climb reaches the center of Australia, it levels off. Will the entire western 2/3 of Australia be under water at the hour of the pole shift? If not, any high peak will be so washed over by the ocean in turmoil, rushing into the void, that survival clinging to these mountain peaks will not be feasible. We advise no one to attempt to survive in western Australia for this reason. 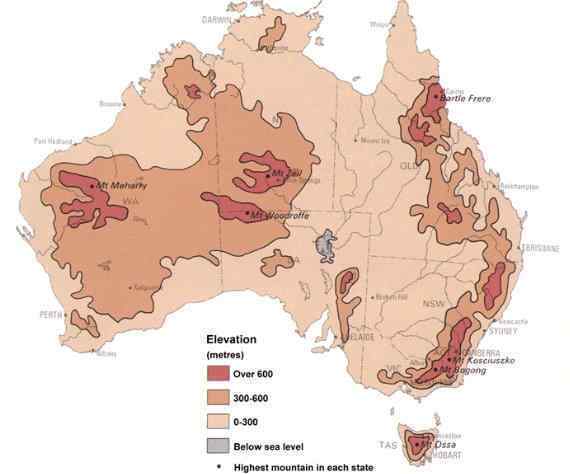 The Indo-Australia Plate bends in several places, as the tilt that this plate is forced to assume, being driven under the Himalayans, is extreme. Australia bends through the lowlands, as we have described, bending such that the eastern part of the Indo-Australian Plate can rest on magma and not just jut into the air. As we explained, the Indo-Australia Plate is assumed by some to be two separate plates - one for India and one for Australia - because of a bend point in the center of the Indo-Australia Plate. But the plate operates as one. But because the Coral Sea also is a weak point in the plate that is already bending of late, there will be a difference between the lift that Queensland gets vs the lift that New South Wales gets. The rise from the center of the Indo-Australia Plate is sharp going toward Queensland, as after bending down just east of Mount Isa, it can level off toward the Coral Sea where there is this additional bend. The heavy lifting that the section of this plate east of Queensland must endure is alleviated in essence by the bend at the Coral Sea. Because of this sharper tilt, more of Queensland will be under deep water, and Queensland will not experience an overall boost in elevation. New South Wales and Victoria, however, will bend at the Central Lowlands and then maintain a steady land shelf on toward the South Island of New Zealand. Thus, one can prorate the boost that New South Wales and Victoria will get. Assume the area around Melbourne to have an approximate 125 foot boost.