Guadalajara, situated near the west coast of Mexico, today enjoys the coastal access, but during the shift this same proximity will spell doom to the residents. The Pacific will shorten, the Atlantic widen, and Central America crumble, creating a larger causeway between the oceans than Panama currently allows. Water will rush from the Pacific to the Atlantic, roaring along the Mexican coastline on its way to this outlet. Rapidly moving water can be forced up into ravines and inland, tidal bore, to relieve the pressure, reaching even to the gateways of Guadalajara. Thus more than a flood tide will present during the shift. Rampaging waters will sweep away anyone caught in its grip. After the shift, the current coastline will go underwater in the main, due to polar ice cap melting, but Guadalajara will have easier coastal access which will afford good ocean fishing. There will be plenty of rain for a few crops in the gloom, and a temperate climate, equivalent to what it enjoys today.

As man is well aware, a blinking or pulsing light gets more attention. The times are coming closer when major Earth changes will be upon mankind, and those making UFO displays are trying to get more pointed, so to speak, in their warnings. The YouTube on Guadalajara's display mentioned that at one point the light pointed to a ravine. Guadalajara is positioned such that tidal bore from the Pacific would reach this mountain city, despite its elevation. Water will reach the streets of Guadalajara, to the astonishment of its citizens. 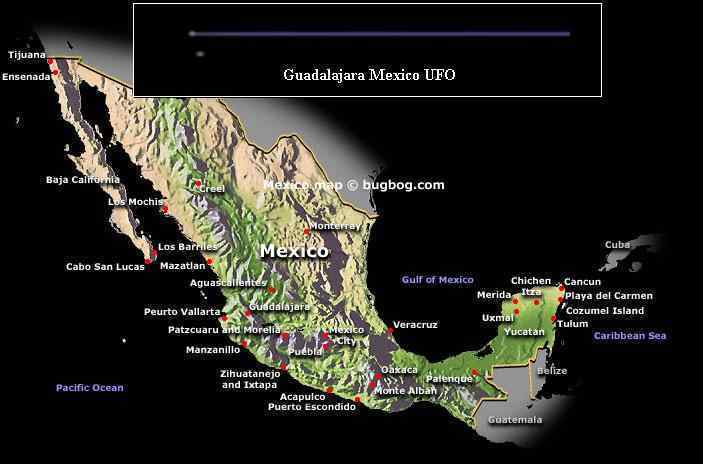