Kazakstan will become immensely important to the Russian people after the shift, as it is high country, and well connected to parts both north and south by culture, commerce, and tradition. Drowning Russians from the north will arrive at what will be the new shorelines, when the lowlands of Siberia go under water. They will bring with them few possessions, but humility will not be among them. Kazakstan is not considered the home of the elite in Russia, but any elite not scrambling to the Urals will try to set up shop in Kazakstan. Where else where they go, to the Alps, or to Sweden? Thus, in preparation for this arrival, either just before or some months after the shift, residents of Kazakstan should mentally prepare their stance toward such a take-over attempt. Guests are welcome but are expected to work alongside their hosts, and no new leadership is desired.

Kazakstan today has both summer and winter, and is agricultural. After the shift, it will find itself closer to the new South Pole, and colder. This will change the culture into one of fishing in the ocean to what will become the new south, over former Siberian lands, where fish and all they feed upon will migrate to eat the rotting material that has gone under the waves. There will be other outlets to the oceans, as the continent will rip and create a rift above the Himalayas, but being centered in the new Polar Circle, this will freeze and not allow ready access to ocean fishing. Inland lakes without an outlet may temporarily rise, due to the continuous drizzle that follows the shift, so residents along the shorelines of such lakes should anticipate moving up into the hills if need be. The jolts from the shift, which will drive the Himalayas higher, will shatter any housing not flexible, so that structures of brick or stone or mortar will fall upon the hapless residents huddled there. Best to weather the hour of the shift outdoors, in ravines, and remake housing afterwards.

We have discussed Kazakstan extensively, which does well during and after the shift, and have nothing substantial to add. Kazakstan will not be flooded during the pole shift nor have to deal with tidal waves, though the inundation from the sea which will overtake Siberia steadily within two years after the pole shift will affect a large segment of Kazakstan also. The ocean will come to Kazakstan, and thus preparations should include building boats for ocean fishing. The climate in the Aftertime will be closer to what northern Canada has today. Crops that do well with a short growing season, such as are grown in Mongolia and northern Canada, should be planned, with seed sock accumulated. Because Kazakstan will do so well, overall, and so much of Russia will be flooded, Kazakstan's largest problem will be sociological, due to an inundation of refugees! Some may arrive well ahead of the pole shift, and attempt to set themselves up as kings. Kazakstan should prepare for this as well, with firm plans on how to deal with such takeover attempts. 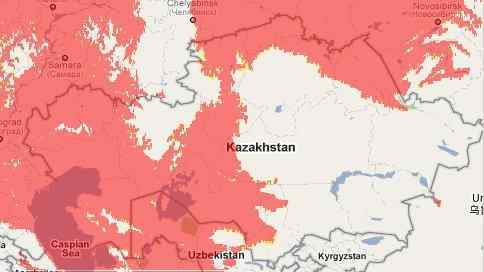