The Altay Mountains are four-corners border of Mongolia, China, Kazakstan, and Russia. The climate will be temperate, much what it enjoys today. As with Mongolia Volcanic ash will not sweep the area, which will enjoy clean air. Mountain building will not occur, nor has it for many eons, as this mountain range is far enough from the Himalayas and is participating somewhat in the stretch that the Eurasian Plate will sustain. Thus, the deep lakes of eastern Russia and Kazakstan. 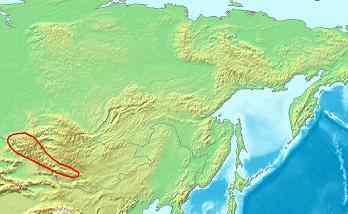 The Altai mountains stand where four countries touch - Russia, Kazakhstan, Mongolia and China. This is high land and can lead a survivor in many positive directions. One direction, within Russian territory, is along the Russian mountains, past Lake Baikal, and onto the new Equator at the Bearing Straits. Another direction would be down into Mongolia which likewise will do well, with a temperate climate and a desert that will bloom in the Aftertime. The highlands of China and Kazakhstan are likewise possible directions, and as they will remain temperate highlands and are agricultural today, so will not disappoint.

Is the Russian government planning an alternative site in the Altai Mountains? They have put their all into the Urals, as they clearly have withstood cataclysmic changes in the past and are solidly within Russian borders. The Altai are, relatively speaking, exposed. This leaves the mountains of Russia, leading to the new Equator, to survivors among the common man. These mountains are relatively cold and barren at present, not populous today, thus there would be less crowding after the pole shift. This whole swatch, high land all of it, will be within temperate or tropical climates in the Aftertime. The Russian government would be advised to tell their people to take this trek, should they be inclined toward honesty and disclosure about the coming passage.