Why the sudden interest in Magnetics? Or better yet, why barium and strontium? [and from another] I thought it was suspicious. In looking through some of the comments on the article today, seems like most people saw nothing. More egg on their faces. [and from another] Recent Newsletter 470 (http://www.zetatalk.com/newsletr/issue470.htm) has Signs in the Skies section. We are having rainbow effects from the grease in tail of Nibiru. This is a cover story. [and from another] http://gizmodo.com/a-nasa-experiment-is-going-to-light-up-the-sky-with-bea-1735168250  NASA says it’s ejecting four different payloads of a mix of barium and strontium, creating “a cloud with a mixture of blue-green and red color.” Here’s an example of a barium release provided by @NASA; you can see the barium’s “ionized component, which has become elongated along the Earth’s magnetic field lines.” And here’s another tracer shot from a launch using lithium vapor and trimethyl aluminum over the Marshall Islands. [and from another] http://www.nasa.gov/content/launch-begins-mms-mission-in-spectacular-fashion  Scientists Michael Hesse and John Dorelli explain the science objectives of the MMS mission. The Magnetospheric Multiscale (MMS) mission is comprised of four identically instrumented spacecraft that will use Earth’s magnetosphere as a laboratory to study the microphysics of three fundamental plasma processes: magnetic reconnection, energetic particle acceleration, and turbulence. These processes occur in all astrophysical plasma systems but can be studied in situ only in our solar system and most efficiently only in Earth’s magnetosphere, where they control the dynamics of the geospace environment and play an important role in the processes known as “space weather.” 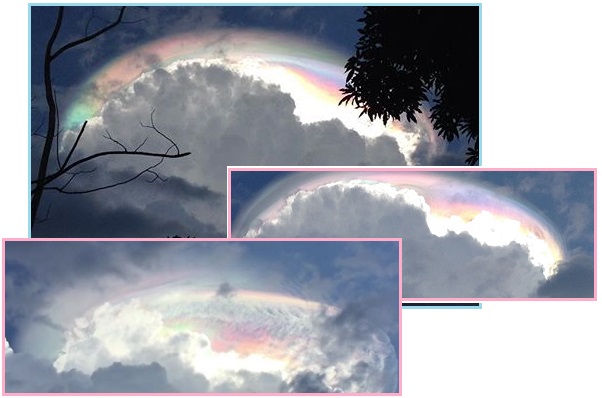 On September 17, 2015 Costa Rica had a dramatic hole in the dark clouds above. This break in the clouds showed brilliant sunlight on the fluffy white Cumulonimbus clouds above the dense lower cloud cover, and circular rainbows were visible around the opening. This was billed as an “End of Times” sign, and appeared in major media globally. Not even a month later, on October 7, 2015 NASA is advertising a “light show” for the East Coast of the US, created by their upper atmosphere seeding with barium and strontium, which they state will create “a cloud with a mixture of blue-green and red color.”

Of course we have also had neon clouds galore lately due to the grease in the tail of Nibiru, aka Planet X, and these neon clouds come in these same colors. None of this is a coincidence, and the public should get used to this type of polarized news – yes it is true, no it is not true. For every evidence of Nibiru that hits the media, there will be comfort news for those who would be driven insane or into drastic action out of fear. The Element of Doubt principle, instituted by the Council of Worlds, which has worked so well in getting the populace accustomed to the idea of the alien presence gradually, adopted by Obama and NASA.