Is Russian astronomer Zakharovich a real person in hiding, or alias used to get info out, or disinfo source? 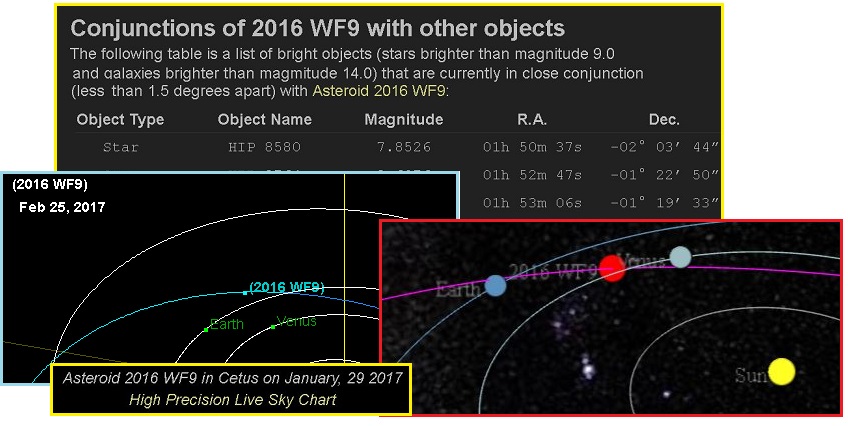 He is not in hiding. He is obviously not strolling about the streets with a sign saying “I am Dr. Z” but he has no reason to hide. No one is chasing him. He would rather avoid interviews. His comments about asteroid 2016 WF9 were very carefully reviewed and selected to bring certain concepts into the public mind and inspire a lot of activity among amateurs who are now looking to see where this asteroid is. It’s very specific in its orbit and when these amateurs look they’re going to find the trash in the tail of Nibiru. Instead of one rock, it’s many, and they will wonder “What’s this all about?” So he did his job, and to avoid constant peppering by journalists saying “Would you expand on this?” and then it becomes a clouded message, he’s trying to hide from the microphone.

Could the Zetas comment this recent finding? Is it related to Nibiru and the Pole Shift? [and from another] How Long Until the Moon Slows the Earth to a 25 Hour Day? January 28, 2017 http://www.forbes.com/sites/jillianscudder/2017/01/28/how-long-until-the-moon-slows-the-earth-to-a-25-hour-day/#223e3b2c51f8 The Earth’s rotation is indeed being slowed down by the presence of the Moon - every year, the Moon gains a little energy from the Earth, and drifts a little farther away from us. This drift is imperceptible to the human eye, but measurable, with the aid of undertakings like the Lunar Laser Ranging Experiment, which regularly bounces a laser off of a retroreflector that Apollo astronauts placed there. Both the drift of the Moon and the slowing of the rotation of the Earth are very very small effects- the slowing of the Earth’s rotation over the last 100 years is estimated to be about 1.4 milliseconds. That’s a slowing of 0.0014 seconds total, over 100 years. [and from another] Are Earth's Magnetic Poles About to Flip? February 2, 2017 https://www.yahoo.com/news/m/3e0274cd-090f-3bdb-b663-07039caf527c/are-earth%26%2339%3Bs-magnetic.html?soc_src=mail&soc_trk=ma Our planet's history includes at least several hundred global magnetic reversals, where north and south magnetic poles swap places. So when's the next one happening and how will it affect life on Earth? Several studies have tried to link past reversals with mass extinctions – suggesting some reversals and episodes of extended volcanism could be driven by a common cause. However, there is no evidence of any impending cataclysmic volcanism and so we would only likely have to contend with the electromagnetic impact if the field does reverse relatively soon. [and from another] What Happened to the Sun over 7,000 Years ago? February 7, 2017 http://www.sciencedaily.com/releases/2017/02/170207092720.htm By analyzing the level of a carbon isotope in tree rings from a specimen of an ancient bristlecone pine, researchers have revealed that the sun a number of exhibited a unique pattern of activity in 5480 BC. By comparing this event with other similar but more recent phenomena, they reported that this event may have involved a change in the sun's magnetic activity, or successive solar burst emissions. [and from another] Shock as 'Alien Planet Nibiru Caught on Film' February 2, 2017 http://www.dailystar.co.uk/news/latest-news/584672/nibiru-planet-x-proof-second-sun-earth-collision-date-2017-video-evidence-manila-bay For years, conspiracy theorists have said this giant hidden planet is set to smash into Earth with catastrophic consequences. And now the alien-hunting community believes it may have filmed Nibiru. Someone posted a video on YouTube showing what appears to be a giant second sun over Manila Bay, in the Phillippines. [and from another] https://www.youtube.com/watch?v=E1hNVTD4WyI

Unlike the specific info emerging at the hands of the Russian astronomer Dr. Zakharovich, which pointed to RA and Dec locations for the passing Asteroid 2016 WF9, the plethora of articles about Nibiru or a pending Pole Shift that followed were not designed to help the public locate Nibiru but to confuse.  The Forbes article about a 25 hour day is indeed reporting facts, but the headline is what will be remembered by the common man, scanning headlines, and thus when slowing rotation happens as a precursor to the Last Weeks, will be dismissed as being caused by the Moon, not by Nibiru.

Another scam repeated by the cover-up crowd is that the Earth magnetic poles flip periodically, for unknown reasons. Yahoo recently repeated this lie, so that the common man, reading this article, will not find their weakening and confused compass off. Blame the Sun has been a cover-up excuse from the start, so that magnetic blasts from Nibiru are blamed on a sleepy Sun. All evidence of prior passages of Nibiru are cast into alternative explanations, and thus a Science Daily article about how the Sun was responsible, two Pole Shift periods back, for Bristlecone Pine growth.

And what of the Daily Star reporting that Nibiru had been caught on film in a video from Manilla Bay in the Philippines? Where on the face of it, this is spreading the word, but the film capture was an obvious ghost of the Sun in the camera, easily debunked! This ‘Nibiru” is in the wrong place, vis a vis the Sun, and too bright. It does not cast a reflection on the water. It is rather perfectly placed in relationship to the real Sun for a ghost capture, including the deformations caused by the clouds around the Sun. All these recent efforts are attempts to detract from the very real awakening done by Dr. Zakharovich.