Something about the recent plane crash of the developer Larry Glazer yesterday just doesn't sit right with the given explanation. Yes, it did travel far over southeast US with everybody on board unconscious but something about it still doesn't sit right. It's also gotten a lot more press than one would expect for just a small plane crash. Providing it just wasn't an EMP zap. Can the Zeta's shed some light on it? He was a big developer in Rochester, NY. Rochester is just south of Lake Ontario of the great lakes and will be subject to the St. Lawrence Seaway adjustment and then rip. Also the tidal sloshing from the lakes during the severe wobble and shift itself. They mentioned on CNN
http://www.cnn.com/2014/09/06/us/unresponsive-plane-crash/  that his plane was a new TBM-900 2014 model. Other sites, and the link in the plane crash blog, are saying they were in a TBM-700, an older model. A little looking and the model mix-up in the news is explained here: http://www.avweb.com/avwebflash/news/TBM-Crashes-With-Unresponsive-Pilot222726-1.html  From that link: "A new TBM 900 (type is formally listed as a variant of the TBM 700)...". The Socata TBM-900 wasn't an old plane and is a very new one. It is also heavily electronic. TBM site for that plane: http://www.tbm.aero/index.php/tbm-900/tbm-aircraft/overview  He also took off in the morning and became unresponsive around 10AM EST. Just when the tail is starting to be in full range for any possible EMP zaps. An EMP zap to the electronics that control the cabin pressure could cause cabin pressure issues. Was their more to this crash than stated thus far? Or was it just simply another EMP zap? Was it a possible suicide or maybe some kind of assassination? If so can they comment on why? We've seen a plane assassination before that hit the news back in June with Lewis Katz of the Philadelphia Media Network to keep him quiet over Planet X. http://www.zetatalk.com/ning/07ju2014.htm

This was neither a suicide nor assassination, nor was it due to faulty electronics on the new plane. We warned that increasing electronic failure would happen due to the charged tail of Planet X interacting with increased electronic screech in the ground, especially when a plane is over water. The East Coast at present is under an intense bowing pressure, a fact recently in the news when methane release was documented all along the East Coast. The outside of this bow will not snap, as the weak point in the N American Plate is the New Madrid Fault Line, which frankly might start adjusting at any moment.

What was the setting for this new TBM-900 to have an electronic failure? It was 10:00 am when the pilot reported problems and requested to dive to a lower altitude, a clear sign that the cabin was depressurizing. Planet X is to the right of the Sun, thus its influence, the hosing of magnetic particles from its N Pole, was ahead of the Sun’s high noon position vs a vs this plane. The rivers of N Carolina pool into lakes near Statesville, which in fact lies between two such lake swelled rivers. These are weak points in the crust, where the crust sags and thus as weak crust is more likely to be stretched thin – thus the electronic screech would be greater there.

What can those accustomed to the convenience and comfort of flying do as the dangers of flying intensify? Stop flying except in emergencies, plot your path carefully based on all our prior admonishments, and use electronic communications rather than insisting on doing business face-to-face. Jetting off on a vacation to a foreign land is a modern advent, a recent convenience, not a right. Look to travel hundreds of years ago as a model, and apply any monies saved to plans and equipment for a survival site. This is our advice.

Is this the Dark Twin on this Italy webcam? Looking West at 22:00 hours on September 1 and 2, it shows up two days in a row, then briefly on August 25 when the Moon is not in the skies at all. Why does the Dark Twin bounce around and why is it illuminated mostly on one side? http://www.foto-webcam.ch/webcam/pognana1/#/2014/09/01/2200 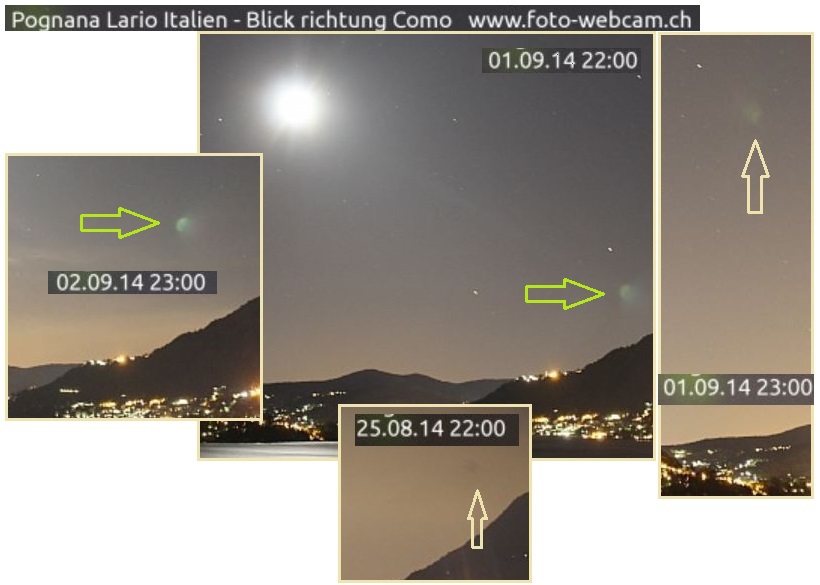 In that it is seen on August 25, dimly, when the Moon is not in the skies, this is not a ghost of the Moon in the camera. The uneven lighting where one side of the Dark Twin is brighter than another is explained by where reflected light goes. Those light rays reflected back toward Earth come from the side facing Earth, still behind the Earth in their shared orbit. Light rays from the Sun hitting the Dark Twin on the side away from the Earth bounce off into space and thus are only dimly seen from Earth. Where this 2014 view is looking West, the Dark Twin is still not quite directly behind the Earth as yet.

Recently in Krasnoyarsk, Russia, have appeared crop circles. The title of the article point to their alien origins in quotation marks. Russia is not famous for fake circles. Could our friends to give any comment about the authenticity of these circles and the message? [and from another] http://www.rg.ru/2014/09/05/reg-sibfo/krugi-anons.html

There are several clues that this is not a genuine design, laid by the visitors. The first is the use of arrows, which is a very human symbol. The second is that by having arrows from every direction, the design lacks motion or evolution. Is this the Earth or Sun being compressed from all sides? This does not ring true. The third is that none of the arrows cross borders, but start smartly at a pathway or road as though human boundaries need to be honored in some way. Legitimate circle makers paint their designs freely, without such constraints.