What happened in Turkey? Theories have spread that this is just a re-enactment in the style of 1933. And especially Russian media. But against this theory say the economic consequences. According to Hurriyet newspaper's online edition, some of the privates who were detained told interrogators they were not aware that they were part of a coup attempt. They had been told by commanders they were taking part in military maneuvers. Some said they understood that it was a coup attempt when they saw civilians climb on tanks. [and from another]  Something smells fishy about this. [and from another] This may be the way for them to crack down on Kurdish MPs and parties as well. Erdogan was trying to remove immunity from MPs recently. [and from another] http://shoebat.com/2016/07/16/this-failed-military-coup-in-turkey-is-just-another-false-flag-attack-by-turkish-president-erdogan-to-consolidate-his-power-and-create-a-neo-ottoman-islamic-super-state/  This “Failed Military Coup” In Turkey Is Just Another False Flag Attack By Turkish President Erdogan To Consolidate His Power And Create A Neo-Ottoman Islamic Super State. [and from another] http://www.aif.ru/politics/world/perevorot_ili_provokaciya_revolyuciya_v_turcii_zakonchilas_za_4_chasa The coup or provocation? The revolution in Turkey over 4 hours. [and from another] https://life.ru/t/%D0%BD%D0%BE%D0%B2%D0%BE%D1%81%D1%82%D0%B8/878484/politologh_obiasnil_pochiemu_nato_nie_pomoghli_turietskim_voiennym_podavit_miatiezh Political scientist explained why NATO did not help the Turkish military to crush the rebellion. The expert suggested that the insurgency in Turkey was similar to staging, from the rebels initially had no chance. From the first hours it was clear that the coup in Turkey, will not last long, because it involves not the senior military leadership of the country, and some separate group of rebels in the Turkish army, the political scientist said Life, orientalist Yevgeny Bakhrevski?. This could be the reason why NATO, which includes Turkey, did not intervene in the situation. [and from another] https://www.rt.com/news/351602-turkey-supreme-court-arrested/ Turkish prosecutors have issued arrest warrants for 140 Constitutional Court members and 48 members of the Council of State in the wake of Friday night’s attempted coup. Ten arrests have already been made, local media reported. [and from another] http://www.independent.co.uk/news/world/europe/turkey-coup-erdogan-government-death-penalty-restore-attempted-istanbul-ankara-latest-dead-a7140391.html The Turkish government is considering bringing back the death penalty so it can execute those involved in the attempted military coup.  [and from another] https://www.rt.com/news/351630-erdogan-turkish-military-relationships/ “This uprising is a gift from God to us because this will be a reason to cleanse our army,” President Recep Taiyp Erdogan stated earlier, addressing a large and desperate crowd of his supporters. [and from another] http://www.hawaiinewsnow.com/story/32459378/the-latest-10-from-turkeys-administrative-court-arrested [and from another] http://www.wsoctv.com/news/turkish-president-says-hes-in-control-coup-faltering/403274283 [and from another] http://www.dailymail.co.uk/news/article-3693268/Defiant-masses-fight-Stunning-scenes-brave-citizens-rise-against-attempted-military-coup-dragging-cowering-soldiers-tanks-beating-streets.html [and from another] https://www.rt.com/news/351602-turkey-supreme-court-arrested/ [and from another] http://www.dailymail.co.uk/news/article-3693729/Did-Erdogan-STAGE-coup-based-Turkish-cleric-facing-extradition-botched-rebellion-claims-president-orchestrated-plot-justify-clampdown-civil-rights.html

Did Erdogan stage his own attempted military coup? No, but he is quick to take advantage of it, becoming more of a dictator than before. Erdogan had already purged high ranking members of his military who were not in sympathy with his goals. But since the failed coup Erdogan is again purging the military of any who even remotely participated in the attempted coup, even if only a lowly soldier under orders to participate in what they thought was an exercise.  Why did the coup fail? Half the military was attempting to reclaim the country for the people, and the other half was getting conflicting orders from the officers Erdogan had promoted.

Erdogan is using this attempted coup to further his goals of an Islamic State, arresting dozens of judges and even those on Turkey’s Supreme Court. He is arresting members of his own government. He is seeking to reinstate the death penalty for various crimes. He has already shut down the media and imprisoned anyone who dared mutter a word against his rule. Meanwhile, reports emerge of his increasing paranoia. Paranoia does not bring down a leader, however. One has only to look to Stalin, who reigned for decades and reputedly murdered 40 million of his own citizens, to see that.

Now what? Erdogan cannot control the circumstances swirling around him. The turmoil in Syria, much of it bred by his own support of ISIS by brokering stolen oil from Syria and Iraq, has now poured into Turkey in the form of an endless flow of refugees. He cannot move these refugees along to an increasingly reluctant Europe, and cannot send them back. Turkey’s tourist industry is at a halt due to ISIS terrorist attacks within Turkey, as ISIS is now resentful that Erdogan turned his back on them.

Turkey is a NATO member but it is clear that neither the US nor any other NATO country came to his rescue during the attempted coup. Erdogan has Russia on one side and the rebellious Kurds on the other.  The US will not exit the country from their NATO base at Incirlik, nor will the Turkish military be allowed to assume control of this base.  In fact, Russia is being invited into Incirlik, using this as a base during their attacks against ISIS. Turkey lost the vote on Armenia, so their past genocide of Russian people in Armenia there is on record. Despite Erdogan’s reluctant apology about shooting down a Russian fighter jet threatening his brokered oil profits, Russia and Erdogan are not buddies.

Thus, friendless, isolated from his former partners in ISIS and Saudi Arabia, and dealing with a groundswell of anger within the Turkish populace, Erdogan can only resort to increasingly draconian measures. Repression. A police state. Cruel punishment of any opposition. The type of government so well documented in history, as represented by N Korea today. This structure succeeds only where the populace has no alternatives, and is used to such repressive measures. This is not true of the Turkish populace. Erdogan may flee the country, or may be killed by his own top advisors, as Stalin was.

The wobble has gotten worse. It this the cause of the extreme heat over most of the Northern Hemisphere? [and from another] Earth Just Experienced the Hottest June Ever Recorded July 20, 2016 http://www.huffingtonpost.com/entry/june-2016-hottest-month_us_578f07f9e4b0f180da639fdf?section= Last month was the hottest June ever recorded, according to both NASA and the National Oceanic and Atmospheric Administration (NOAA). This marks the 14th month in a row that global heat records have been broken. It’s the longest streak of record-breaking temperatures since reporting began in 1880. The planet is well on track to surpass 2015 as the hottest year ever recorded. [and from another] Global Temperatures set 14th Consecutive Monthly Record July 20, 2016 https://www.rt.com/news/352196-global-heat-temperature-record/ Researchers said that both El Niño and human-created global warming can at least partially explain the increase in temperatures. 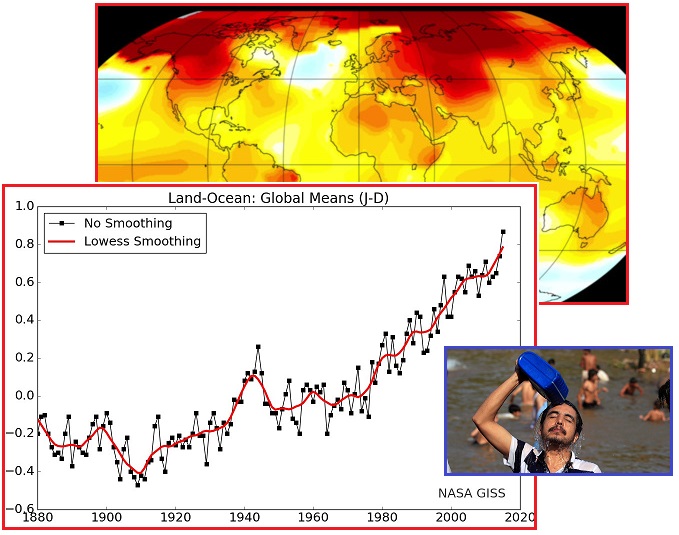 The weather maps continue to document the daily Earth wobble, showing abnormal heat over the N American southwest and up into Alaska, and abnormal heat through Europe. Both these regions come under more equatorial sun due to the wobble, due to the lean to the left and then to the right. This is distinctly balanced by cold spots in between. Canada’s eastern provinces and the region above Hudson Bay receive less sunlight due this tilt to one side and then the other. Russia’s Far East and the Siberian region above China of course are pushed into the cold by the daily Polar Push, when the N Pole of Nibiru shoves the Earth magnetic N Pole away.

Until the Last Weeks arrive, the Earth wobble will get increasingly worse. The daily Figure 8 will be interspersed with occasional Leans into Opposition, where the N Pole of Earth points more directly at the Sun and the Earth is laid out in opposition along the Sun’s magnetic flow lines. There may also be brief times when the N Pole of Earth points away from the Sun, though these will be brief and should not be considered the start of the Last Weeks. What will increasingly happen is an occasional Lean to the Left, where the Earth’s flip to the left and right become extreme so the Sun is warming all latitudes equally. All these maneuvers can be easily determined by the location of the Sun. For the Earth, weather extremes are certainly in her future forecast.