I live in Calgary Alberta which is experiencing dramatic flooding in the city and most surrounding towns far beyond anything ever experienced before.  The historical river levels are being attributed to heavy rainfall in the province. Are these floods connected to the slowing rotation of the planet and the waters from the equator being to move northward in the Northern Hemisphere?  There is flooding going on in so many areas including Germany, Czech Republic, India, China, France. Is there a connection between all the areas rapidly flooding globally? [and from another] http://www.cbc.ca/news/canada/calgary/story/2013/06/21/alberta-flooding-calgary-canmore-high-water.html  Floodwaters have caused massive disruptions in Calgary, as well as several other southern Alberta communities, including Canmore and High River. At least 100,000 Albertans, including about 75,000 Calgarians, have been forced out of their homes and large areas of Calgary's downtown core were being evacuated. [and from another] http://poleshift.ning.com/profiles/blogs/7-of-10-indo-australian-plate-moving-catastrophic-flooding  [and from another] http://news.xinhuanet.com/english/world/2013-06/21/c_132475604.htm  Indian officials described the devastation of the Uttarakhand as "unprecedented in 1,000 years" and said it would need at least five years for the flood-affected areas to recover. [and from another] http://www.bbc.co.uk/news/world-asia-india-23001947  At least 40 bodies have been recovered from the river Ganges in the temple town of Haridwar, taking the toll in the flood-hit Indian state of Uttarakhand to 207. The monsoon season generally lasts from June to September, bringing rain which is critical to the farming output, but this year the rain in the north of India and parts of Nepal has been heavier than usual.

What is lost in the reports on horrific and record breaking flooding is the role that heaving or shifting ground plays in the inability of water to drain in its accustomed manner. The N American continent is in a bow, the tip of Mexico pulled west while the top part of the continent stays in place. The Aleutian Islands and the tip of Mexico are the ends of the bow. What happens when the land to the east of the Continental Divide is stretched in this manner? Grab the edges of a rumpled blanket and pull it taut and watch the blanket almost rise from the bed. Rivers drain along the lowlands, and when these rise as the land is being stretched, the rivers cannot drain as before.

Examine this aspect of horrific flooding in various parts of the globe. Uttarakhand in India is where the flat land of India dives under the Himalayas. The land is being pushed down, changing the landscape for water that must drain away from this point. Water may drain as it did before, but more slowly, may accumulate at certain points before being released and then break through an earthen dam to be released in a rush. The Eurasian Plate is being stretched, sinkholes and twisting rails a plague from the UK past the Black Sea region and onto the far East. Thus stretched, river bottom lands in many places will interfere with drainage, causing flooding.

Bark beetles have been eating trees in Forest lands by the millions (some 46 million acres of forest in the western United States and Canada over the last decade, since around 2003).    What causes bark beetles to infest forests on this massive scale?  Are they able to eat better with PX around, or are the trees losing immunity to them?  Why are the numbers of tree infestations declining now as most articles and graphs show in 2013? http://www.fs.usda.gov/barkbeetle
http://www.fs.usda.gov/detail/r2/forest-grasslandhealth/?cid=stelprdb5408531
http://nfdp.ccfm.org/data/graphs/graph_41_b_e.php  Can the Zetas please explain how insects are being affected by the changes in the Earth and Sun patterns, plates and atmosphere?  In Oregon 25K bumble bees had a mass die off in a single event recently. http://www.theblaze.com/stories/2013/06/21/what-caused-the-mass-death-of-25000-bumble-bees-in-a-target-parking-lot/  Oregon State brought investigators to check over the situation.  http://www.examiner.com/article/bee-kill-off-50-000-bees-dropping-from-oregon-trees-was-man-made-happening  The investigators marked pesticides as the official explanation. http://www.kgw.com/news/State-investigating-death-of-25000-bumble-bees-212248091.html (25,000 bees die off) http://www.nbcnews.com/id/52276914/    (50,000 bees now?) http://www.latimes.com/news/nation/nationnow/la-na-nn-bumble-bees-die-in-oregon-20130621,0,1466945.story  This explanation sounds similar to explanations given by the mainstream about animal die-offs and the like.  Increasing global pollution seems to have become the excuse to write off everything under one umbrella:  animals affected, insect infestations, weather anomalies and such.  [and from another]  http://microbewiki.kenyon.edu/index.php/Bark_Beetles_and_Symbiotic_Fungi  Bark beetles destroy stands of trees every year by having a symbiotic relationship with fungi. These fungi are devastating to the health of the tree.

What mankind sees in the fauna and flora around him is the status quo that has been established over the econs. Species have died out, and evolution is continuous, but man is shocked to find the balanced state in nature becoming unbalanced in his lifetime. Life is opportunistic. Trees are attacked by fungus or virus or bacteria, often carried by insects that burrow under the bark. They develop resistance or the species dies out. The American Elm was brought to the US from Europe, and subsequently killed by Dutch Elm Disease in this manner. Climate change exacerbates the changes that can affect all species, and this is likewise affected by faltering immune systems stressed by surging sub-atomic particle flows caused by Planet X. Life will prevail, despite setbacks, and establish a new equilibrium.

Our tiny family just witnessed a milestone event. We saw your appearance on one of the main Russian channels. Being old fans of your work, we were very excited to see you and Mikhael Kashin, the Russian ZetaTalk mirror supervisor, on a TV screen. For us this an important victory and your smiling and blowing a kiss was a kind gesture to see. http://russia.tv/video/show/brand_id/34565/video_id/492994/viewtype/picture
http://youtu.be/tLd6Ql2v0Hg  [and from another] Who won the vote at the end? Mystic of Skeptic? Mikhael Kashin: 53% Sceptics 47% Mystics. However there is rise trend. When I was there first, right before 12/21/12, mystics had only 8%, in May on the show about Nibiru mystics had already 23%. 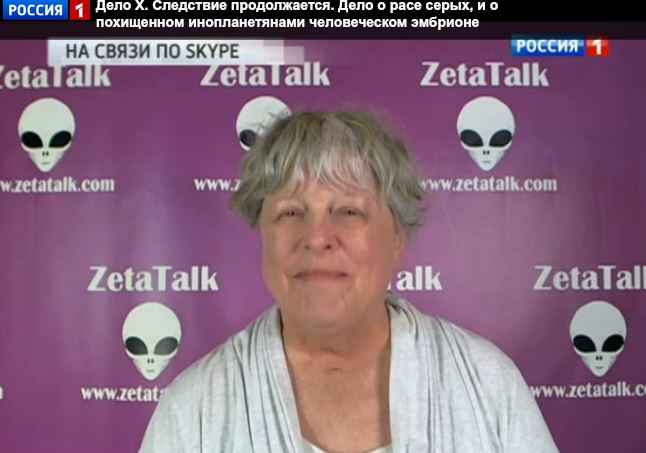 Nancy in the media, which we predicted, though this show came prior to the announcement and not in what we predict will be a flood of appearances after the announcement by Obama admitting the presence of Nibiru. Russia is more open to discussing the alien presence and evidence of Nibiru, aka Planet X, and thus is leading the charge. This broadcast also shows how easily a TV appearance can be arranged, from the comfort of Nancy’s home, and on a moment’s notice. The Russia 1 broadcast will set a precedence. Get in line, TV stations of the world!

More than 20 languages in India have the base Sanskrit (or were created from). Who created this division and why (also for the rest of the world like Europe). First settlers? Couples were taught language and religion (say Marathi and Hinduism) and they taught it to their children and so on. If there were cave men who had no language, how did they think without a language to create a language? Does it help spiritual growth when there is diversity?

Creatures of all types use body language and sounds to signal one another. The chirp of a bird alerts others to a predator slipping through the grass. Certainly the roar of a lion speaks to his territorial intentions. Language as a communication vehicle in humans preceded vocal cords and the written word, as a huff or sigh communicates as well as a word. Language developed as human intelligence developed, to carry complexity in the message, with written material such as pictographs and hieroglyphs developing. Why would many versions of a language such as Sanskrit evolve, and why so many languages in Europe?

Early man did not have the travel luxuries that modern man has, where he can traverse the globe within days. Early man was on foot, and hindered by rivers and mountain gorges. If a language develop and was carried a distance by groups on the move seeking new hunting territory, evolution changed the language over time. The English language has as many variations and dialects as it has countries or regions where spoken. Think in terms of evolution and isolation influencing change. Europe had mountain ranges that separated groups, so that this evolution in language development was extreme.

They always show in movies [at least in India] that police and politicians are bad so good people don't go for these jobs as they think other people will think they are bad and hence the vicious circle is never broken and things keep on getting worse. Please spread this or something similar so the wheels in people’s heads will start turning and they will realize the role of movies in their lives. Who start the concept of kingdoms which then led to the concept of countries? Who selected the first generation kings and queens of India and Europe? Was it the 12 Planet hominoids or just the good old power hungry humans or someone else? Or was it just that some crazy people selected 1 guy as the king in different places and then they set about to expand their kingdom, or was good old religion the cause?

Although both the media and entertainment such as movies are used by those in power to attempt to influence the public, in the main they reflect real life - lonely people finding love, heroism in the face of danger saving the day, misuse of power by those in power being countered by a refusal in the public to allow abuse to continue, karma at work, etc. Compare what is relayed in documentaries to what is displayed in the movies, and you see similar trends. Of course real life does not have Superman or Werewolves, but the themes of struggle and resolution are there. That said, why do the movies, or real life, portray those in power as being driven by greed and the desire to rule over others?

The evolution of entities into the Service-to-Other orientation is primarily guided by a maturing process. The young soul is faced with spiritual decisions many times a day. Should empathy prevail, a desire to reach out to help another at risk to the self, or should the entity chose instead to hoard or run away? There are a thousand nuances to this struggle. Empathy may require only that one speak out when another is being verbally abused, perhaps risking the anger of others in the confrontation. Shielding the self instead may require only that one fall silent, or walk away. These decisions build upon one another, with the repercussions being evaluated, so that eventually a dither becomes a resolution to move in one direction or the other.

If the desire to shield the self prevails, and grows in strength until it becomes the prevailing mode for this entity, then the advantages of being in a powerful position are increasingly sought. Power as measured in today’s world does not differ from the cave man’s day in this regard. A large brute who can wield a club or has other members of a family with these genetics can take a kill from others, as is true in lion prides and among squabbling crows. In today’s world power is measured not so much by brute strength but by finances, the modern equivalent of the club.  Money can buy the club.

The self- focused thus seek political power, which uses the wealth of others, or to rise in the ranks in corporations where they have more bargaining power. This swells their numbers, but not all in politics or running corporations are self-focused. For the self-focused, ALL want to be king, and thus each faction has their kings, seeking the larger realm. Has there ever been a kingship where there were no plots to assume the throne? Even within families such power struggles exist. If the larger kingdom cannot be secured, then a portion of the kingdom is sought, a battle to secede. Such is life on the prison planets that the Service-to-Self inherit. The pecking order is forever in play.