Heavily populated areas have several drawbacks during times of crisis such as the coming cataclysms will bring. However well prepared a given family may be, they are never prepared for what their neighbors will bring to them. New York City is one of the most heavily populated areas, and by being a coastal city, has additional strikes against it. Thought the Atlantic will recede at first during the pole shift, due to the Atlantic widening and the waters having in general flowed toward the poles when the Earth’s rotation stops, wave action and reaction will find all shorelines bombarded with sloshing water at some point. For many, on islands along the coast supported by a system of bridges that have been torn apart, they will have no escape. Tall buildings will bash into each other during the seemingly endless earthquakes, which they were scarcely designed to withstand. Fires and the howls of the injured and desperate make travel through such a devastated area literally life threatening. Those who stay in New York City during the coming cataclysms are either ignorant of what is about to occur, courageous, or harboring a death wish!

Despite protestations that this is all caused by lots of melting snow and the need to salt the roads heavily, 65 exploding manholes is hardly the result expected. Electrical outages would be expected, if anything at all. Were these electrical systems installed by dumbies? The equipment is not on the floor! The establishment must say something to avoid addressing the Earth changes, and it is always considered safe to blame the weather. New York City has been built on rock, the high rise buildings footed on rock, but this does not mean that methane gas has not accumulated between the layers beneath these footings. In fact, it is the footings themselves that are part of the problem. During a violent wobble, sinkholes and crevasses appear in stretch zones because the ground is pulling in first one, then another, direction. This drops soft soil down any vent that has been established by this action, and thus the sinkhole. In like manner, these vents can allow gas to rise. Stick a rod into the ground and move it back and forth, and what do you get? Soil or rock on either side will be pushed away from the rod, thus forming a vent for gasses to rise. 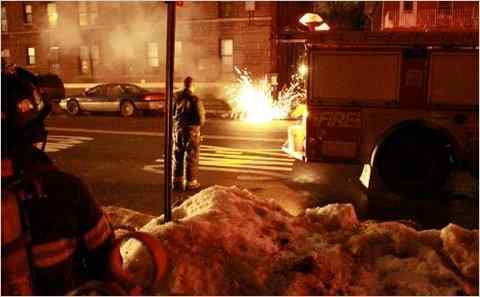 Parts of NYC begin getting flooded at 10-20 feet, and the entire city area will be under water at 100 feet. This means that your skyscrapers, if left standing, would have 600 feet of water around them. Tall buildings will vibrate at different rates during the earthquakes, bash into each other, and thus collapse. This is in addition to what is known for city dwellers everywhere - exploding gas mains and water mains, so fires cannot be extinguished. Those who plan on staying in your cozy city, and living in whatever sticks up above the water, whatever has not been burned, with others who will be starving and looking at you as a meal. The bridges will be down. Any rail service impossible due to twisted rails. The waters sloshing about so boat service is inconceivable. 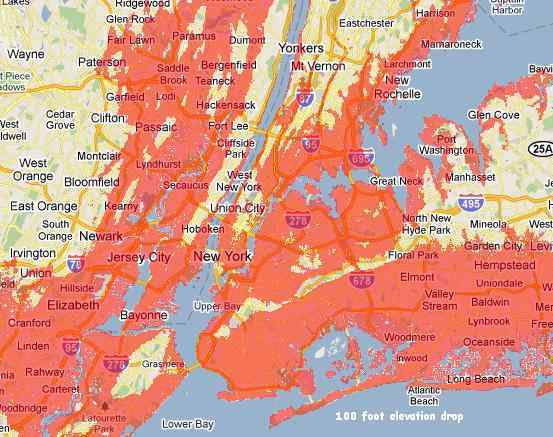