As surprising as it may sound, when Iceland rides on a fault line and today has active volcanoes melting the glaciers with their increasing eruptions, Iceland will not suffer unduly from earthquakes and volcanoes during the shift. This is due to the spread of plates, rather than compression, in Iceland's part of the world during the shift. In the scripted drama that emerged during the hour of the shift, Europe and Africa has been pulling east during the week of rotation stoppage, causing the coastlines along the Atlantic to sink. Where Iceland's coastline does not pull down during this rotation stoppage, being beyond the main tug along the equator, this is an example of stretch, not compression, for Iceland's fault line. When the crust starts to shift, the Atlantic Rift rips, creating a separation at the fault line where Iceland rides, and the roiling magma has many places to flow, so the press upward into volcano spouts is not present. Why would magma chose such a difficult path when it can spread outward, laterally. Thus, Iceland will be no more troubled by volcanoes than today, and the earthquakes expected to be a few singular jolts, rather than the endless jiggling that compression areas experience.

Iceland will have a radical change of climate after the pole shift, as it will be located under the new Equator, rather than in the frozen north as it is today. Being a land of high mountains as well as ice, and used to garnering a living from the sea, icelanders will fare well both in surviving the shift and in the Aftertime. The major problem during the week of rotation stoppage will be the rise in tides as water flows from the Equator to the poles. This will likewise cause higher tides inland during the sloshing about that the oceans will do during the shift itself. Afterwards, during the two year period when polar ice will melt, including any large bodies of ice under the new Equator such as Iceland will present, the danger will lie in sudden release of melted ice water from mountain lakes. Survivors should take care not to be located in gullies, or potential gullies, between such lakes and the sea.

Iceland has been formed from volcanic rock, over the eons. This is not a violent birth, as the stretch zone just opens up, creating a crevasse. In the case of Iceland, which straddles the border of two large plates, the crevasse fills promptly with magma, which hardens. It does not split into pieces, it grows larger, thus. One can see this in the nature of the rock. Those nervous about this chasm should move away from the plate borders for the duration of the pole shift, moving back only after the magma has cooled. 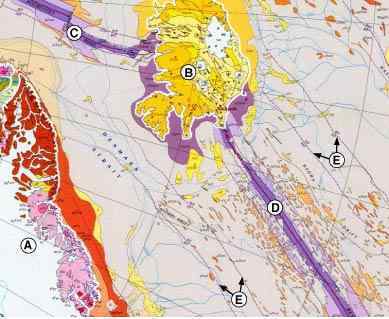