Uralsk, also known as Oral, is above the Caspian Sea in western Kazakhstan. This area will flood in the Aftertime, when the sea level rises 675 feet. Consider the population of western Russia, who will in the main survive the pole shift as their land is not immediately flooded. Picking themselves up after the devastation that collapses their cities and blows the landscape about in unaccustomed hurricane force winds, the survivors will at first feel the worst is behind them, especially since the climate has become more moderate. Then the slow but steady encroachment of water, at first up the rivers and then spreading to all lands with a lower elevation. Those who thought they were on high ground, well drained and well away from any river flooding, will find the river waters coming to them, and still rising. Migration is inevitable - large numbers of people on foot or by whatever means, trying to move to higher ground. When this high ground starts melting underneath them, then boats will be constructed out of whatever material floats.

Northern and western Russia is a huge area, well populated today, and almost all of these people will be migrating in the Aftertime. Some will migrate west toward what they know is high ground, to Sweden. Some will migrate south to another region they know is high ground, to the Alps, but where further east within Russia they will consider the Ural Mountains or the high ground of Kazakhstan to be their salvation. The crowding in those migratory routes will be intense. Those with wet boots, and exhausted, finding a spot to rest for a moment will be overrun by those coming just behind them. And no foot anywhere. Most of drowning central Russia will attempt to go to the Ural Mountains, which is Russian territory and closest at hand. When the fighting over a spot of dry land becomes too intense, many who have arrived on boats or have managed to fashion them will move south, along the Ural Mountains, toward what they know are other swatches of dry land within Russian territory.

Thus, they will arrive at Uralsk, where they can go no further. The Ural high lands have run out, and water everywhere before them. This is where they must bridge over to the known high ground of eastern Kazakhstan, which will visibly be above the waves in their view to the east. We have advised that the people of Kazakhstan prepare to feed themselves heavily by fishing in the rising waters, as fish will be propagating, feeding on the dead and the decaying vegetation. Those who have drifted south to Uralsk will have learned to do this, but the crowding in Uralsk as the jumping off place for a boat trip to lands east will be intense, and anxieties high. Moving a make-shift boat along the edge of land is one thing, but crossing an expanse of open water another. Many will linger, and tension will be high among the starving. 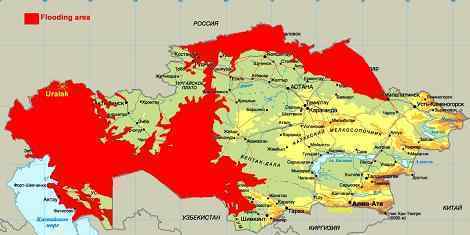 The people of Uralsk were being warned of this, with the recent very visible UFO in clear blue skies. Once on dry land, survivors who have made the journey will not be wanting to wander further, but will be wanting to settle and rest, to recover from their journey. Thus all of Kazakhstan will be heavily populated by newcomers, without exception. As with our advice for all cities, those living in cities such as Almaty will find they have to move out into the country to sustain themselves, and the further north, the more moderate the climate.

Russia suffers greatly due to the flooding that will occur after the pole shift. Most of the country lies beneath the 675 foot elevation where we estimate the waters will rise. The Ural Mountains clearly stand above this, as do the mountains of eastern Russia. But vast, heavily populated areas of Russia will become steadily flooded after the pole shift, to the dismay of survivors who perhaps have assumed they survived the worst. Cities like Ufa, Perm and Ekaterinburg essentially border the Urals, such that they will be partically flooded but so soggy that life cannot continue as before. The inhabitants will of course scamper to the Urals, to join a massive number of refugees forced their earlier. The mountains of eastern Russia are sparsely populated, in Russian territory, and will have a delightful climate in the Aftertime. We advise an early migration to those regions, or a migration via boat if delayed.