If the pressure on the point where the Pacific Plate noses into Japan was immense enough to cause the recent 9.1 quake there, what do you suppose the pressure is on the edge of the Philippine Plate, and the vulnerable Mariana Trench? This is why in our 7 of 10 scenarios we predicted that these plates would fold. The Mariana Trench collapses, tilting the Mariana Plate and pushing it under the Mariana Islands, and the Philippine Plate tilts and pushes under the Philippine Islands. This process has started, but hardly completed as yet. Then look at the point where the Pacific Plate noses into the plate tongue holding Indonesia. This again is a pressure point, and the fracture of small platelets there shows how much pressure has been applied in the past.

The reason the Japan quake happened at this time is because the points south have been compressing, making the Japan point the point of greatest pressure. The Indo-Australian Plate had been tilting in mid-2010, sinking the Indus River valley on the Pakistan/India border by 10 feet. This plate is also rising at the New Zealand end, as the recent quakes in Christchurch show. Indonesia has been folding like an accordion and sinking since December, 2010. And on occasion the buoys show that the Mariana and Philippine Plates have folded, somewhat. What now? Since subduction under Japan has eased the pressure, the pressure will return to points south again. This will prove to be iterative to some degree, until the 7 of 10 scenarios in Asia have completed.

Plate tectonics involves various dramas on the plate borders - clash or subduction bounaries, slip-slide boundaries, and stretch zones boundaries. Where plate borders clash, one plate pushing against another, this most often has one of the plates either riding over or pushing under the other. Such border clashes are invariably accompanied by massive quakes in the range of magnitude 8-10. Japan, the Andes, the West Coast of the N American continent, and the Himalayas are examples of such border clashes. During such clashes there will be a point where the pressure is greatest, and that will be the spot where a quake will occur.

The Pacific is currently compressing, in step with a widening Atlantic, all caused by the jerking around that planet Earth is enduring during the daily Earth wobble caused by the magnetic push/pull from Planet X. The position of the Moon and its resultant gravity pull has scant influence on the matter. The parts of the Pacific Plate are themselves folding, down along the island chain that forms the Hawaiian Islands and on down to the Society Islands. These adjustments are primarily silent, for man, who does not have seismographs located on the deep ocean floor, but can be detected on occasion by the ocean buoys which show heaping water from one end of the Pacific to the other.

The Philippine Plate is tilting, plunging under the Philippine Islands and lifting slightly on the other end near the Mariana Islands. The Mariana Plate is also tilting and plunging under the Mariana Islands. Thus, pressure from the central Pacific is being relieved by this movement, where pressure on the north Pacific requires adjustments at Japan. A glance at a plate tectonic map shows that the recent quake in Japan happened at precisely the point where the pressure from the compressing Pacific would be the greatest. Now that an adjustment has been made at this point, further folding of the Philippine and Mariana Plates can occur. This may be iterative, returning to the Japanese coast on occasion, or to New Zealand, which is lifting. The pressure point will move, and result in a quake. 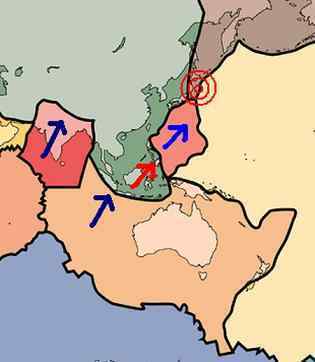 We have predicted that the South Islands of Japan will be greatly affected as the 7 of 10 folding of the Mariana Trench and tilting and folding of the Mariana and Philippine plates finalizes. Tsunami as high as 135 feet will occur as the plates tilt during the folding, acting like a giant platter under the sea to lift the water and force it west. The Philippine Islands and the coast of China are likewise vulnerable to this tsunami. The size and force of this tsunami depends upon how rapidly the Mariana and Philippine plates tilt, and to date this has been a slow process. Where it appears that Taiwan and the island of Luzon in the Philippines might disappear when the Philippine Plate tips and folds, dropping its western parts, there is confusion about the exact plate boundary and these land masses are more firmly affixed to parts west than to the Philippine Plate.

Nevertheless, the jolting that occurs when one plate slides under another, even though the slide is ameliorated by the underlying plate dropping at a radical angle, is a shock. We have predicted jolts as strong as a magnitude 8, though called magnitude 7 by the USGS, for Japan. Japan attempts to prepare for tsunami and quakes as much as any country in the world, and will likely survive the 7 of 10 plate folding going on nearby without undue disasters. It will be the next round of quakes that will cause devastation to Japan, when the Northern Hemisphere adjusts leading into the New Madrid and European tsunami. Japan's March 11, 2011 quake was deemed a 9 by the USGS though in truth it was a greater magnitude and created much devastation. This is an example of what to expect during the big quakes to afflict Japan preceding the New Madrid adjustment and of course during the hour of the pole shift itself. Yes, infrastructure will be shattered and ships capsized at that time. 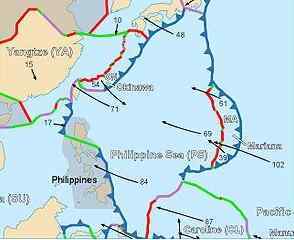