Where have we failed? We have used words like fractured, crumbled, crunched, experiencing great trauma, dragged along, or ground up. In addition to what will happen to the land mass, we have mentioned exploding volcanoes very near at hand, and water rushing completely over such lowlands as the Yucatan and Panama. How have we failed to relay what is coming? If total destruction does not occur during the 7 of 10, it will during the hour of the pole shift if not before that time. We have described the 7 of 10 as moving the top of S American Plate 250 miles to the west. Not all this movement involves S America, due to adjustments elsewhere, but nevertheless Panama and Costa Rica will be crushed during the 7 of 10 by the grinding movement of the hump as the great S American Plate grinds over it.

Does this bring to mind a ride in a car with a bad set of shocks? The land before you will heave up, up to several hundred feet high, and tumble toward you. This is an example of what we mean by "crumbled". Landslides caused by rain and steep hillsides is not a preview of what to expect! The entire mountain may sheer off and slide into valleys, crushing not just a village or road but all civilization for dozens of miles in either direction, buried under so much rock that rescue is unthinkable. Valleys will simply fold, the mountain ranges coming together and squeezing all life out between them. Guatemala, El Salvador, Nicaragua, and Honduras hardly fare better, though the hump of S America does not grind over them. Rock strata torn apart is not local, but has a reach. They will crumple also, but to a lesser extent during the 7 of 10. 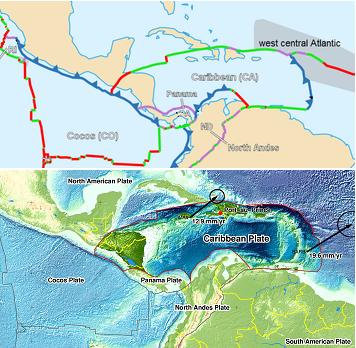 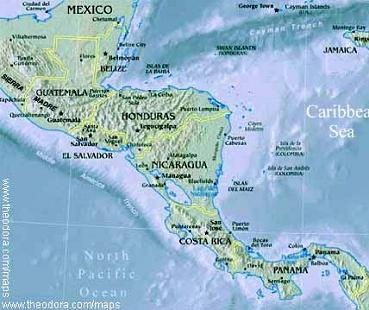 When the Caribbean Plate is pushed west, and pushed down, this will of course greatly affect those Central American countries on that plate. This includes Panama, Costa Rica, Nicaragua, El Salvador, Honduras, and as the plate border cuts through central Guatemala, it too is affected. But Mexico is unaffected by the shifting plates. Except for some interference with tides in the Gulf of Mexico, caused by the dissipating tsunami that will course north when waters rebound over the sinking Caribbean Plate, the N American Plate will be relatively unaffected.

The S American roll will not take place in an instant, from start to end, as is obvious from the preliminary movement already taking place. The region of the N Andes fault line is suffering mountain building. The Caribbean Plate off coast from Colombia recorded sinking in 2010, and Panama is flooding due to preliminary sinking, even having to close its locks at one point for the first time in its 125 year history due, supposedly, to rain. Where this will proceed in steps and stages, one should not assume a leisurely pace! Trauma from magnitude 8 and 9 quakes along the Andes will still strike suddenly, and the crumbling of Central America will likewise be traumatic and strike suddenly for a given location. When two mountain ranges moves closer together, for those in the valley this cannot be anything other than a horrific trauma. Likewise with sinking, which for those islands due to lose hundreds of feet in elevation, can place the inhabitants in boats, if they are lucky, with little warning.