Many areas of the Philippines are suddenly reporting flooding, from rain, though the rain only seems to fall where there is ocean access of lowlands with access to the sea. Certainly the buoys to the east of the Philippines indicate action, as the sea flood is dropping there, water on the rise! The buoys above New Guinea, in the Pacific, likewise indicate a rising sea level. What could this mean? 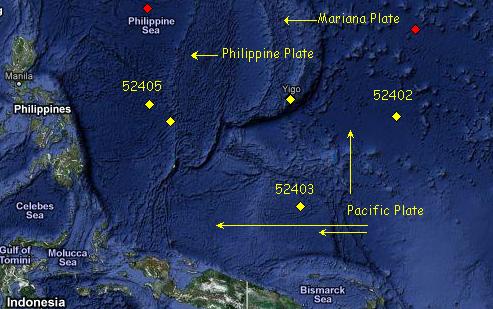 There is indeed a relationship between the high waves and flooding in the Philippines in those towns along the eastern coastline and inland with access to the sea. The Philippines have begun to sink, though such sinking is never such that an entire land mass or large island sinks uniformly, so can be deceptive. There is an additional influence from the tilting of the Philippine Plate and continued compression out in the Pacific, so that water is heaped to the east of the Philippine Islands, and is washing over their eastern shores during equalization of the water level. However, this latter is a relatively small influence. The issue with flooding is absolutely due to a dropping in elevation for some parts of the Philippines.

Also occurring simultaneously to the flooding in Medan and the eruption of Mount Sinabung was a 5.7 earthquake along the western curve of Sumatra. Can these three incidences on January 2, 2011 be a coincidence? Hardly. But why would only the eastern coast of Malaysia sink, while the western coast, across from north Sumatra (which is sinking), remain? 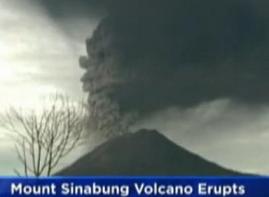 Prior to the end of 2010, starting on December 23, 2010, sinking along the southern coast of Java was evident, with no remission in this flooding a week later on December 29, 2010. Now there is evidence of flooding along the eastern shores of Malaysia and the eastern shores of northern Sumatra. The incidence of flooding on the coastline of eastern Sumatra occurred on the same day as a new volcanic eruption on a volcano previously inactive for 400 years, just 30 miles from the flooding in Medan, and a 5.7 quake occurring offshore along the border with the Indo-Australian Plate nearby. Just the day before flooding along the eastern coast of Malaysia was reported, again only in those areas on the coast or with access to the sea. Why are some areas seemingly exempt from sinking and flooding while others sink?

We have explained that the land masses of Sumatra and Java have been formed from rubble, when the plate tongue holding Indonesia was pushed down and under the curve of the Indo-Australian Plate in the past. Rubble does not act as one, but adjusts more like settling gravel, a bit here then a bit there. Why would the eastern coast of Malaysia be affected, but the west coast facing Sumatra be exempt? The issue of the plate holding Indonesia folding like an accordion came up in November, 2010 when Bangkok, Thailand experienced flooding that refused to drain while a new island merged near Bali. Our explanation was the accordion folding of the tongue holding Indonesia, under intense pressure from the compressing Pacific. Follow the line folding the valley of Thailand down a bit further and you arrive at the eastern coast of Malaysia.