The red mark on all those webcam shots appears to be a flare. It appears in front of clouds. http://poleshift.ning.com/profiles/blogs/please-place-your-planet-x  [and from another] Example from Wiki http://en.wikipedia.org/wiki/Sunset where it is clear the clouds above are wispy but at the horizon they appear dense and black. [and from another] The Colors of Sunset and Twilight http://www.spc.noaa.gov/publications/corfidi/sunset/  The most memorable sunsets tend to be those with at least a few clouds. Clouds catch the last red-orange rays of the setting sun and the first light of the dawn like a theatre screen, and reflect this light to the ground. Some of the most beautiful sunrises and sunsets feature solid decks of middle or high clouds that cover the entire sky except for a narrow clear strip near the horizon. The entire landscape takes on a surreal saffron hue as the clouds reflect the fading sun's red and orange glow, allowing very little blue (scattered) light from the upper levels of the atmosphere to reach the ground. [and from another] Atmospheric Optics http://en.wikipedia.org/wiki/Atmospheric_optics  When the angle between the sun and the horizon is less than 10 percent, as it is just after sunrise or just prior to sunset, sunlight becomes too red due to refraction for any colors other than those with a reddish hue to be seen. 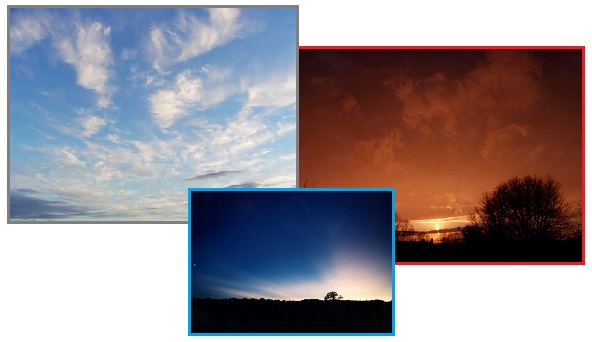 Light can shine through clouds or fog. It is very dense clouds that block sunlight, and even then not completely. These Italy webcam images are taken at dusk, and clouds in the distance at these times appear more dense than they in fact are. They are wispy. The darkness at sunset in distant clouds is due to the lack of white light bouncing around in the clouds, but they are thin, wispy. The Second Sun sightings occur at dawn or dusk, when the curve of the Earth facilitates the bending red light to become dominant. The clouds in this Italy region and the time of day are your clues. What are the clouds like during the day, overhead by the Sun? Has this been researched?

Today there has been major power outages/surges in downtown Washington, DC and Maryland area.  Would the Zetas care to comment on what the cause was and why that location please. [and from another] http://www.nbcwashington.com/news/local/Scattered-Power-Outages-Reported-in-Across-DC-Area-298923411.html  An equipment failure at a SMECO power substation in Charles County appears to have caused the outages. A Pepco high-voltage transmission conductor at the substation fell to the ground, according to SMECO. Pepco confirmed it is investigating exactly why that transmission line broke. A back up system that senses low voltage, which are purposely sensitive and designed to sense risk, did their job, and switched over to back up. [and from another] http://www.washingtonpost.com/local/scattered-power-outages-reported-across-dc-area/2015/04/07/8f4e8b84-dd49-11e4-a500-1c5bb1d8ff6a_story.html?postshare=8801428432572726  A power surge temporarily knocked out power to the White House, State Department and wide swaths of the nation’s capital and its Maryland suburbs. D.C. homeland security officials, utility providers and law enforcement officers in Charles County, Md., said a fire or explosion at an electrical facility in Southern Maryland appeared to be the source of the surge. [and from another] http://bigstory.ap.org/article/5fbc4026ce0f463497c304383eec04f8/white-house-other-sites-affected-power-outages-across-dc  The mechanical failure occurred shortly before 1 p.m. at a transfer station some 35 miles southeast of Washington in Charles County, Maryland, that is controlled by utilities serving Washington and southern Maryland. Homeland security officials in Washington and Maryland said there was an explosion at the station, although the two utilities, Pepco and the Southern Maryland Electric Cooperative, could not immediately confirm that there was a blast or fire. [and from another] http://www.washingtonpost.com/local/scattered-power-outages-reported-across-dc-area/2015/04/07/8f4e8b84-dd49-11e4-a500-1c5bb1d8ff6a_story.html  A piece of metal breaking loose from a power line 43 miles southeast of the District momentarily knocked out electricity. The outage threw scores of public and private office buildings off the grid, but in most cases, the lights stayed on because backup generators kicked in. Dotter said the fluctuation in the voltage probably left some in the D.C. area experiencing a power loss and others a power surge. D.C. Homeland Security and Emergency Management Agency characterized the unusual incident as a broad “power surge” that sent any District facility with a critical operation to emergency backup power. A Pepco transmission conductor in Mechanicsville, Md., “broke free from its support structure and fell to the ground.” The failure on the 230,000-kilovolt Pepco line cut the supply to two power stations run by SMECO.

There are several clues that the DC region blackout was caused by electromagnetic pulse. The first was the casual and quick manner in which officials announced it was not terrorism, even before they were able to point to a cause. They knew it was electromagnetic pulse, but were not admitting this to the public. The second clue is the repeated statement by officials that the blackout was due to a surge, when this is not how the grid and its protective mechanisms work. A surge happens during an electromagnetic pulse, but a failure in the grid causes a voltage drop, a brownout. The third clue is the wide ranging and spotty nature of the blackouts, which did not follow a grid but rather affected a region.

Why was Washington DC affected? It is situated in lowlands, known in the early days of the republic as “foggy bottom” for that reason, a swampland which had to be drained so the mosquito population could be controlled. It is situated at a tear point during a time when the N American Continent is in a taut bow, the bow ends at the Aleutian Islands and the tip of Mexico pulling toward each other. The center of the bow is at San Diego. Follow the line across the continent and you arrive at Washington DC. Chesapeake Bay is an obvious rip point where tears have occurred in the past. Will more such blackouts afflict the East Coast of the US? These electromagnetic pulse episodes have just started, and depending upon their vulnerability, will increasingly afflict cities worldwide.

This week was some kind electrified. I would like to add to the question about Washington one more question about London. London's blackout: Underground fire in West End leaves 5,000 homes and businesses in darkness. http://www.dailymail.co.uk/news/article-3021628/More-2-000-workers-flee-plumes-smoke-engulfing-central-London-offices-dramatic-blaze-takes-hold.html  [and from another]
Holborn Fire: 2,000 Evacuated In Central London After Underground Blaze Beneath Pavement April 1, 2015  https://uk.news.yahoo.com/holborn-fire--2-000-evacuated-in-central-london-after-underground-blaze-beneath-pavement-150532290.html?vp=1#sL9MDBw  Six fire engines and 35 firefighters and officers are at the scene, where a large safety cordon is in place. Among those evacuated in the area were judges, lawyers and staff at the nearby Royal Courts of Justice on the Strand.  The electrical blaze started among cables. [and from another] Holborn Fire: Flames Filmed Coming Up Street April 1, 2015 http://www.telegraph.co.uk/news/uknews/11509726/Holborn-fire-flames-filmed-coming-up-street.html  The London Fire Brigade dispatched 35 firefighters in six fire engines to tackle the blaze that started with electrical cables in Holborn, central London. [and from another] LSE Fire Sees 2,000 Evacuated from Kingsway, Holborn Tube Station Closed April 1, 2015 http://www.huffingtonpost.co.uk/2015/04/01/london-lse-uni-fire-holborn_n_6984864.html  The inferno has reportedly led to power surges, electricity failures and internet outages in the surrounding areas, with office workers and students filling the closed streets. The fire is thought to have been started by a faulty electrical junction. [and from another] Underground Fireball Explodes in Finsbury Park April 2, 2015 http://www.london24.com/news/underground_fireball_explodes_in_finsbury_park_1_4020548  The flames were caused by a faulty fuse box under the pavement, which caused power problems in the area. A spokesman said: “It was an electrical fuse box in the pavement.” One witness tweeted: “So massive fires under the pavement in Holborn and on my boyfriend’s street in Finsbury Park. What’s going on?” 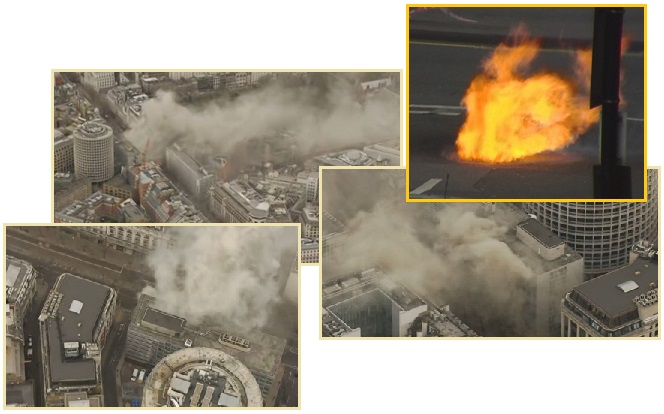 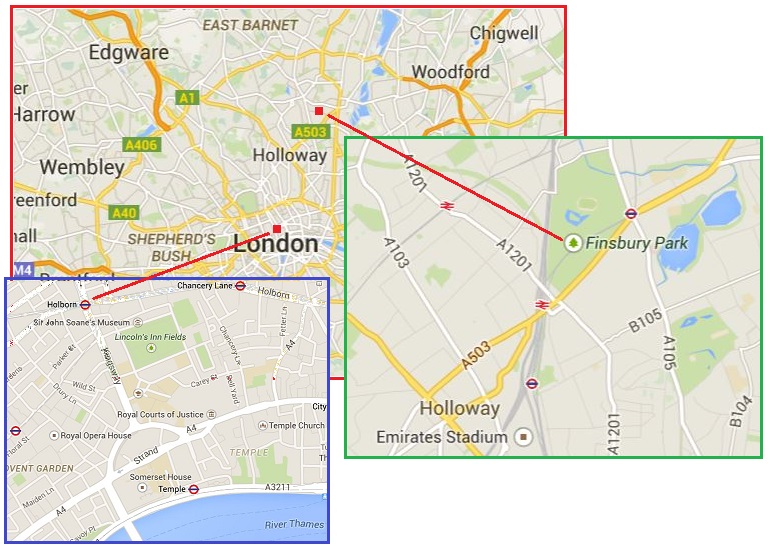 The London fires were clearly caused by electromagnetic pulse. The establishment will continue to give excuses for these events, as they are reluctant to admit how powerful Nibiru is, magnetically, nor do they want to admit to the many lies they have told the common man over the past decade. The erratic weather, increasing drought and deluge cycles, and ferocity of storms is not due to man-made Global Warming. It is due to the Earth wobble and roiling magma, both caused by Nibiru, aka Planet X. The many planes losing control of their electrical systems and crashing into seas or mountains are not due to pilot suicide, but are caused by electromagnetic pulse.

As with the blackouts in the Netherlands and Turkey and the crash of the Germanwings plane in the foothills of the Alps, electromagnetic pulse struck the region because of the stretch the Eurasian Plate is sustaining. Rock has pockets which break up the flow of electricity in the rock, but in stretched or compressed rock the air pockets are reduced and thus an electronic screech is facilitated. Arching to the charged tail of Planet X follows. Lowlands such as Amsterdam and London are sited on thin crust, which pulls taut during the stretch, and these cities are also soggy, close to the water table. What is the clue that electromagnetic pulse was the cause of the London fires? They simultaneously flared up in more than one location, at a long distance from each other.