In 1995, ZetaTalk stated that Sightings would be on the increase, including mass sightings. Many occurred in 2003, and by 2004, the increase was at an astonishing level, and increasingly reported in the media. On January 26, 2007 a mass sighting by United Airlines workers in Chicago hit the news, and on February 7, 2007 a repeat of the 1997 Phoenix Lights occurred. In 2008 such stories began hitting major media. CNN, MSNBC, and even the conservative Fox News covered a massive mothership sighted overhead in Texas and a New Year's Day UFO sighting in San Diego.

Dozens in Texas Town Report Seeing UFO
January 14, 2008
http://www.msnbc.msn.com/id/22656172/?gt1=10755
In this farming community where nightfall usually brings clear, starry skies, residents are abuzz over reported sightings of what many believe is a UFO. Several dozen people - including a pilot, county constable and business owners - insist they have seen a large silent object with bright lights flying low and fast. Some reported seeing fighter jets chasing it. "People wonder what in the world it is because this is the Bible Belt, and everyone is afraid it's the end of times," said Steve Allen, a freight company owner and pilot who said the object he saw last week was a mile long and half a mile wide. "It was positively, absolutely nothing from these parts." While federal officials insist there's a logical explanation, locals swear that it was larger, quieter, faster and lower to the ground than an airplane. They also said the object's lights changed configuration, unlike those of a plane. People in several towns who reported seeing it over several weeks have offered similar descriptions of the object.
Could the UFO in the San Diego Skies Be Sky Lanterns?
January 1, 2008
Possible explanations flooded into FOX6 after we aired our first report, from top secret military drones to rockets. Several viewers suggested the lights were Chinese flying lanterns. Basically, minature hot-air balloons fueled by a candle or other flame. They are customarily released at the New Year for good luck.
Signs of the Times #1467 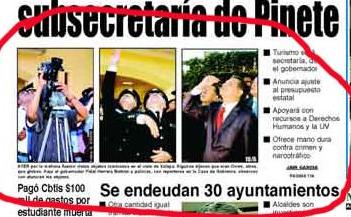 [Jun 24, 2004] 'A massive UFO sighting took place on Friday June 24, 2005 in Xalapa, Mexico. This stunning event was witnessed by Xalapa's governor, Fidel Herrera Beltran, members of his staff, many officers of the Xalapa police department, newspapers and television reporters and many people gathered at Casa Veracruz for an official ceremony for the delivery of new police patrol cars to the police department. Just after governor Fidel Herrera Beltran finished a speech inaugurating the new units, his attention was called by his officials signaling to the sky where a strange spectacle was appearing. A spectacular UFO fleet of at least 14 unknown flying objects shocked the entire gathering at casa Veracruz who, pointing to the sky, screamed "OVNIs OVNIS!!" in a tremendous state of excitement. The police officers were also signaling to the sky wondering what these unknown flying obJects could be. Governor Beltran took the microphone and said jokingly: "It seems the martians have arrived!!" The engimatic flying objects remained almost static in the sky in formation describing a triangle pattern in perfect alignment for almost 30 minutes. On Friday night, TV Azteca presented the report with videos on their national tv newscast giving the account of the unprecedent incident. On Saturday June 25 the Diario de Xalapa newspaper as well as others published on main headlines.' [and from another] In step with the increased pace of the Awakening, sightings will become mass sightings, affecting the whole populace in crowded or urban areas. The media will suppress the news, but they cannot prevent neighbors from chatting with one another or gossip on the Internet. The word gets out. ZetaTalk: Mass Sightings, written July 16, 1996 [and from another] Where sightings are on the increase, just where and when they occur depends on many factors, only one of which is the desire of the local inhabitants to experience one. Some sightings such as the dramatic Mexico City sighting seen by thousands and video taped by hundreds, hasten the Awakening by being broadcast and highly authentic. ZetaTalk: Sighting to Increase, written Jul 15, 1995 [Note: this dramatic Mexico sighting, witnessed by the Governor, has been completely suppressed in the US media. Zetas RIGHT Again!]
Signs of the Times #1196

Little Green Men Adore Ontario Town [Oct 20, 2003] ‘The small town of Moonbeam, Ont., may want to change its name to Roswell North as it gears up a tourism campaign to become the UFO capital of Canada. Local lore has it the town was named Moonbeam after several residents reported seeing strange, unexplained lights in the sky as early as the 1900s.’ [and from another source] UFO Sightings Worldwide are High [Oct 22] http://www.unknowncountry.com/ ‘On October 19, the Cassini spacecraft returned a very strange image indeed from the region of that very planet, that reveals what appears to be a cylindrical object in space between Cassini and Saturn.’ [and from another source] Intense UFO Activity in Midwest, Canada [Oct 2] http://www.unknowncountry.com/ ‘Strange beams of light are being observed in the midwest and Canada. The National Weather Service theorized that the lights were moonbeams shining through the clouds. According to the National Weather Service, it was clear at the time of the incident.’ [and from another source] UFO Conference To Present Startling New Evidence [Oct 20] http://www.unknowncountry.com/ ‘Among the guests at this years conference is Air Force First Lt. Robert Salas, a former missile launch officer responsible for nuclear warheads stored at Malmstrom AFB. He describes an incident in 1967 in which a glowing, oval-shaped object hovered over the base and disabled approximately 20 nuclear warheads housed in an underground bunker.’
Signs of the Times #1131
Northern Poland hit by mysterious record-breaking earthquake [Sep 21, 2003] http://www.wbj.pl/?command=article&id=24013 ‘The quake exceeded 5 on the 10 point Richter scale, which makes it the strongest ever recorded in the region. Scientists are at a loss to explain possible reasons for the earthquake as the region is not considered to be seismic. [and from another source] Strong earthquake shakes the Oslo region [Sep 21] ‘Two unusually strong earthquakes shook the Oslo region Tuesday afternoon. The last quake, which measured 5 on the Richter Scale, made many large buildings sway and rattle glassware in private homes. Experts at the NORSAR earthquake observatory north of Oslo say it is very unusual that an earthquake that far away was registered at such strength in the Oslo region. It is also unusual that two such strong quakes occur within two-and-a-half hours.’ [and from another source] These quakes were widely reported in the Finnish media because earthquakes hardly never ever happen at this part of the globe. [and from another source] It is unique for our region. Many scientists are in shock. In discussion forum in Internet (f.ex. www.Delfi.lv) also were mentioned link to www.zetatalk.com
Signs of the Times #886
UFO Puts Portugal on Military Alert [Jun 4, 2003] http://www.unknowncountry.com/news/?id=3845 ’The Portuguese press has announced that the airforce is on alert since dozens of people saw a UFO on Tuesday. The Portuguese UFO is described as a silent, luminous object, giving off white smoke. Paulo Lagarto, of the national air traffic control authority, Navegacao Aerea de Portugal (NAV), says, "The control tower in Oporto (north) detected a flying object which had been observed 25 minutes earlier in Montijo and Beja (south)." Geologist José Fernando Monteiro says the UFO wasn't a meteorite, since a meteorite would have moved much faster and made a lot of noise. The European Space Agency says it wasn't a satellite.’ [and for another country] ‘In South Devon, in the U.K., the switchboard at the Herald Express was swamped with calls from people who saw a cigar- shaped UFO. Retired British Aerospace engineer Roy Dutton tracked the object for 20 minutes through a high-powered telescope. There were no features whatsoever. It was jet black. It was just like a great big party balloon. It was flying at about 10,000 ft and it was very big, at least the size of a Jumbo jet.’ [and from another source] Multicolored UFO Photographed Over Hugo, OK [Jun 4] http://www.rense.com/general53/mutli.htm [Note: the trend for more mass sightings, more camera and video recordings, continues. The Awakening the Zetas stated would occur.]