On November 30, 2002 the Zetas stated predicted that the Earth changes caused by the near proximity of Planet X would cause imploding buildings.

Cities have several stories under them, where electrical wires and plumbing run, so as to keep this from the streets above. It is not just those cables and pipes buried in roadways, but the deep basements of skyscrapers that we are addressing. The Earth, in areas where it is being stretched, like the entire eastern portion of North America and western portion of Europe, will find the ground adjusting. What does it take to break a supporting structure, causing the mass to come down? And if the mass drops, the buildings where this plumbing went up into are finding a tug down where they were least designed to expect this. This weakens the infrastructure of the building, and it then starts to implode and plummet. As in earthquakes, building affect their neighbors, and fire starts and spreads. When would this start, and where? We are not allowed to pinpoint the city or estimated date, just as we are not allowed to do so with earthquakes. However, we can say this, that anyone living in stretch zones should expect this to happen at any moment, as the trail derailments have shown that earth movements of this kind, a separating of support, has started. Many cities are rooted in rock, but this also can shift, one side down, the other tilted up, and this alone would cause adjustments in the cities above. In cities in compression zones, or slip-slide, the results are similar, but accompany quakes. This, city disasters along with quakes, is called earthquake damage. Our imploding buildings prediction will not be called as correct until such matters happen outside of quake accompaniment.
ZetaTalk: Imploding Cities, written Nov 30, 2002

On March 3, 2009 a perfect example of an imploding buildings occurred in Germany. This was not an earthquake fault, not due to recent maintenance, nor was the building so old that collapse of the building itself would have been expected. Note the mention of recent cracks in the basement floor. The implosion was due to the ground under the building giving way.

3 Missing in Germany Building Collapse
March. 3, 2009
http://www.msnbc.msn.com/id/29491469/
Cologne's six-story city archive building rumbled and then collapsed into a pile of rubble. Many people inside were able to flee to safety, but authorities said they were searching for three people missing from nearby buildings. The collapse, which occurred about 2 pm, also dragged down parts of two neighboring buildings in the western German city. "Suddenly there was a rumbling, as if a train were going past," witness Alfred Hoovestaedt. "Then the noise got louder and louder, and we heard vibration. Then, in seconds, the whole area was covered in a haze." Florian Hacke, who lives two buildings away, said he ran out of his house after he heard a creaking noise and cracks opened up in his ceiling. Alerted by the sounds that preceded the collapse, staff and visitors at the Cologne archive were able to get out in time. The modern-style building opened in 1971. A longtime archive employee, Eberhard Illner, told a German radio station that he had noticed cracks in the basement last year. 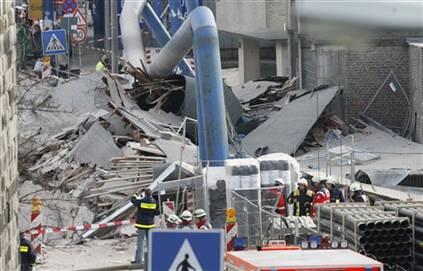