Can the Zetas explain what is causing this sudden asthma breakout in Australia? [and from another] http://www.thedailysheeple.com/bio-warfare-like-150-bombs-going-off-6-people-dead-and-8500-hospitalized-in-australia-due-to-rare-thunderstorm-asthma_112016 More than 8,500 people were hospitalized last week and six have now died in Australia due to what is being reported as a rare phenomenon known as “thunderstorm asthma”. [and from another] http://www.huffingtonpost.com.au/2016/12/02/melbourne-on-alert-for-second-outbreak-of-thunderstorm-asthma/ There were at least 8500 people treated due to the thunderstorm, many experiencing breathing problems. Four in 10 people experiencing thunderstorm asthma symptoms had not been diagnosed with asthma. A very unusual weather occurrence, thunderstorm asthma is triggered by large storms that can cause significant breathing problems even for totally healthy people. The big issue last time around was that the torrential rain combined with a high pollen count, sending millions of small particles across the city.

Where dust storms can stir up pollen, they do not create pollen asthma in people who previously did not have asthma. The issue here is not the rain or pollen, but particulate in the vast tail of Nibiru which is wafting the Earth increasingly. Nibiru is slightly south of the Sun’s Ecliptic, and due to the Polar Push of the daily Earth wobble, Australia gets a lot of this tail waft. Normally, the dusty tail trash lands and lies on the ground where it can be collected during a dust storm. Will such storms continue? They will in fact increase, and may become common in the near future in other countries with a southern exposure too.

This transformation team work? 14 November, 2016. Pro-Russian candidates win presidential votes in Bulgaria and Moldova. 5 December, 2016. Italy Referendum: Prime Minister Renzi Quits as Voters Deliver Stinging Rebuke. 5 December, 2016. New Zealand Prime Minister John Key in surprise resignation. 28 November, 2016. 'French Thatcher' Francois Fillon wins France's Republican primary. [and from another] http://www.telegraph.co.uk/news/2016/11/14/pro-russian-candidates-win-presidential-votes-in-bulgaria-and-mo/ Voters in Bulgaria and Moldova elected pro-Russian populist presidents on the weekend, adding to mounting concern about Western unity following Donald Trump’s victory in the US election last week. [and from another] http://www.dailymail.co.uk/news/article-3998508/After-Brexit-Trump-political-earthquake-Austrians-polls-amid-fears-elect-Europe-s-far-right-leader-World-War-2.html Far-right candidate Norbert Hofer has lost the race for the Austrian presidency. Hofer, who often carries a Glock pistol, had hoped to capitalise on the anti-establishment wave credited with delivering Brexit in Britain and sending Donald Trump to the White House. Green Party candidate Alexander Van der Bellen is set to be the new president of Austria following today's elections. [and from another] https://www.yahoo.com/news/italys-renzi-loses-referendum-constitutional-reform-exit-polls-221129482.html Opposition parties denounced the proposed amendments to the 68-year-old constitution as dangerous for democracy because they would have removed important checks and balances on executive power. Under the proposals, the second-chamber Senate, currently a body of 315 directly-elected and five lifetime lawmakers, would have been reduced to only 100 members, mostly nominated by the regions. The chamber would also have been stripped of most of its powers to block and revise legislation, and to unseat governments. [and from another] http://www.infowars.com/the-vote-in-italy-will-be-a-wide-ranging-fk-off-and-its-just-the-start/ Anti-elite sentiment is rising on both sides of the Atlantic. An Italian exit from the single currency would trigger the total collapse of the eurozone within a very short period. The referendum is meant to concentrate more power in Italy’s central government. On that point alone, everyone should oppose it. The centralization of power never leads to good things. [and from another] http://www.bbc.com/news/world-asia-38204424 Known by the local media as "Teflon John" because very little controversy has stuck to him during his time in office, Mr Key is credited with steering New Zealand through the 2008 global economic crisis and out of recession. He has sought to build closer ties with the US, taking a leading role in supporting President Barack Obama's Trans Pacific Partnership (TPP) - a 12 country trade deal covering 40% of the world economy. However Donald Trump's recent victory in the US has derailed that process, with his announcement the US would be quitting the TPP on his first day in office in January. [and from another] https://www.rt.com/news/369182-newzealand-prime-minsiter-resigns/ The prime minister of New Zealand, John Key, has announced his resignation in a shock move that means the center-right National Party will have a new leader heading into next year’s general election. [and from another] http://edition.cnn.com/2016/11/27/europe/french-republican-primary-runoff/ French conservatives have picked Francois Fillon as their presidential candidate in next year's election. Fillon could face far-right National Front Party leader Marine Le Pen in the final round of the presidential vote next spring, as voters are widely expected to boot out the Socialist Party that has ruled France since 2012 under the leadership of President Francois Hollande, whose popularity is waning.

The US elections have gotten special attention from the Transformation Team, a group closely coordinating with the Council of Worlds and benign aliens worldwide, because of the immense impact the US Military has around the world. The US has a military as large, or larger, than all other countries combined. This has been used in the past to push corporate agendas, and to place Israel and Jewish bankers in control as well as to grant power to the Bush/Clinton criminal network, including their associate Soros. The agendas of this cabal have ruled, for decades, but is in the process of being taken down, one loss after another.

The Transformation Team, as we have explained, is composed of many parts. Ben Fulford and his groups, Wikileaks and Assange, Anonymous working with millions of contactees behind the scenes, General Dunford who is currently in charge in the US, the Puppet Master who wishes to see the populace of the world informed about Nibiru and the pending passage, and his protégé Trump, ourselves at ZetaTalk and Nancy, and many, many others who quietly work behind the scenes. This Transformation Team owes their strength to the backing of the Council of Worlds, who went to war with the elite of Earth over their objection to the Nibiru announcement.

The cabal being taken down, whom Fulford calls the Khazarian mafia, wanted war with Russia, essentially World War III, and to create chaos forcing Martial Law in the US and Europe. This has been stopped by Trump’s election. What is being stopped are the Soros riots such as Black Lives Matter and anti-Trump, and in Europe the continuous flood of ISIS embedded refugees that would have eventually created so much chaos in Europe that Martial Law would have been called. The cabal wanted what they called the New World Order, top down elite control. This included existing elites such as European royalty and political parties that have ruled for decades.

The attacks on the cabal have included what we will call the Gold wars, constantly in the Fulford reports. This stems from the theft of Gold from Fort Knox (which occurred under Clinton and Bush) and other victims, pedophilia exposure, and the takedown of money laundering networks such as was done by the Panama Papers and the coming investigations into the Clinton Foundation. There is a natural domino effect from the slipping grip of the cabal. The success of the Trump campaign shows this, a reaction against what is called Globalism whereby the elite at the top control benefits from trade deals while the common man suffers. Immigration to create chaos, long a Soros tool, will be blocked while war mongers such as ISIS and Turkey and Israel are halted. This domino effect also includes election results in Europe.

This message is about current “local” news receiving coverage across Australia but probably not even getting a mention in America;  it may relate to a plan for Singapore to “re-locate” to north-eastern Australia.  (The Zetas have talked about various countries wanting to do “deals” with Australia to get land.) The news is essentially about a “defense” agreement between Australia and Singapore, wherein 200,000 hectares of prime farmland would be seized (from Australian farmers) for use by Singapore.  The land granted would be nearly three times the current size of Singapore.  There are reasons to think there is more to the deal than is being said. The land being targeted for acquisition is prime farmland, where the farmers do not want to sell;  meantime, just further up the road, there is an equivalent area of lower-quality farmland where the farmers would be happy to sell.  Taking prime farmland would assist the Singaporeans with food self-sufficiency in the Aftertime. The deal allows for the building of a supposedly “mock city” with multi-storey buildings.  This would give the appropriate “spin” to cover for the Singaporeans to start building their Aftertime accommodation. The location of the land just happens  to be on the eastern side of Australia, rather than anywhere on the western two-thirds which is closer to Singapore (and which will be submerged during the Pole Shift). Would the Zetas care to comment on whether there is more to this deal than is being reported? PS:  One square kilometre is 100 hectares. Singapore is about 720 square kilometres,  which equates to about 72,000 hectares. I have no idea how the Singaporean Defence Minister calculated that the land in question is “10 times the size of Singapore”  -  unless there are more details than have been released. [and from another] http://www.theaustralian.com.au/national-affairs/defence/queensland-farmers-angry-at-few-details-on-singapore-army-base/news-story/618b7cb9f2215c4c074f1705afcf1734  The 200,000 hectares of rich farmland west of Townsville set for reclamation would be used by the Singapore Army to train 14,000 troops. Singaporean Defence Minister Ng Eng Hen said in May, when the security agreement was signed, that his country would build its own base facilities on the land at Townsville and Shoalwater Bay.  Dr Ng said the vast area — 10 times the size of Singapore — would allow long-range artillery and Apache attack helicopters to fire live rounds of high-powered ammunition undisturbed. Singapore also plans to build a “mock city” with multistorey buildings on the fertile cattle-fattening country so its soldiers can “hone their urban warfare skills”.  [Local farmers, whose land would be compulsorily acquired, say]  “It shouldn’t be this country (that’s acquired). We’re all fighting for it because it’s just such good cattle-fattening land. There’s three much less valuable properties one hour up the bitumen at Greenvale where all the owners are happy to sell, which would give the same land training area at much less cost.” [and from another] http://www.abc.net.au/news/2016-11-25/farmers-battle-department-of-defence-over-north-queensland-land/8057750  [and from another] http://www.couriermail.com.au/news/queensland/queensland-land-owners-face-forced-handover-as-part-of-singapore-defence-deal/news-story/3a8ad50a6cc53556b8ea501ac1624b65  [and from another] http://www.abc.net.au/news/2016-05-06/singapore-to-expand-queensland-defence-bases/7389168  [and from another] https://en.wikipedia.org/wiki/Singapore Singapore is a sovereign city-state in Southeast Asia, and the world's only island city-state. [and from another] http://www.dailymail.co.uk/news/article-2852824/Asylum-seekers-shipped-desert-island-new-proposals-Indonesian-MPs-Ministers-say-plan-ensure-not-disturb-public.html Asylum seekers trying to reach Australia could be housed on Indonesia's uninhabited islands. Galang Island, Batam, in the country's northwest was used to accommodate 250,000 refugees during the Vietnam War between 1979 and 1996. The suggestion follows last week's decision by Australia's federal government to lock out asylum seekers who registered after July 1, 2014. 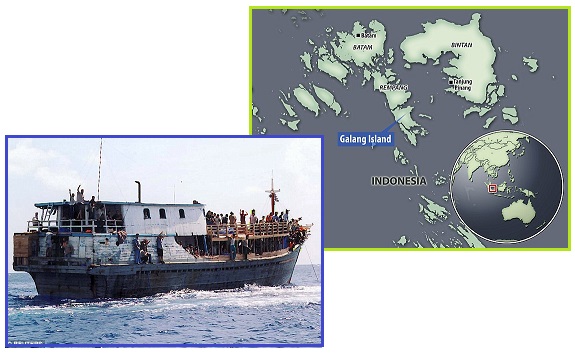 Why is Australia interested in Singapore’s defense? Singapore is a city state, a nation unto itself. If it fell, the only repercussions would be to the citizens of Singapore. But Singapore has an advantageous location, in that it is just across the Straits of Singapore from the Indonesian island of Batam, an Indonesian island used during the Vietnam War era to house up 250,000 refugees. Indonesia worked a deal two years ago, in 2014, to house the refugees rebuffed by Australia until they could be taken to New Guinea or some other such alternative destination.

Has the Batam Island deal with the elite of Indonesia gone sour? It is more that Singapore does not have alternatives, where the elite of Indonesia can go to Borneo, the proposed new site for Jakarta. Borneo will be above the waves during the Pole Shift sloshing, and above sea level in the main after the sea level rises in the Aftertime. Thus moving to eastern Australia and taking orders from Australia is not as attractive. Management of Batam island, just across the straits from Singapore, could easily be assumed by Singapore, as it has become an unnecessary burden for Indonesia. In exchange, the elite of Singapore can plan on moving to Queensland.