Alaska will fare well during the coming geological changes for a number of reasons. Where it is now in a cold climate, it will move to a very temperate location. The volcanic eruptions anticipated where Alaska's active volcanoes now exist should blow out across the water, not inland, under the influence of the new prevailing westerlies, so the land should be spared. And since it is scarcely populated, there will not be the problem of masses of starving humans to contend with, which can create destructive riots. In selecting locations in Alaska, one should consider the possibility of tidal waves along the coast, but the key consideration should be the volcanoes, which are already active, and which will increase their activity to the point of exploding during the pole shift.

The Alaskan Pipeline will inevitably be fractured along its course during the pole shift and will thus drain dry. What oil does not soak into the ground will be lit and burned during the lightning storms that occur during the pole shift, a burning that might start at only one place but will spark burning along the entire course. Oil that does not drain out of the pipeline will burn at the ends, creating a torch that may burn for months.

Clearly the habitable plateau of the Kenai peninsula will suffer from the pole shift tidal waves and the sea level rise to 675 feet that will occur within 2 years after the pole shift, as its elevation is low. The Kenai peninsula lies squarely on the N American Plate, which is solid and will retain its boundaries throughout. The compression of the Pacific has in the past impacted the Aleutian Island more than it will in the future, though volcanic restlessness should not be presumed to lessen. Thus the concerns of those on the peninsula should be focused on life after the pole shift while living in the mountains. Access to ocean fishing and very tropical weather for flourishing gardens should provide abundant food sources, and thus seed or hothouse stock that can thrive in tropical weather should be secured ahead of time. Beware the bears, who will have their habitat invaded. As we have stated, Alaska after the shift will be a war between man and bear, with one eating the other. 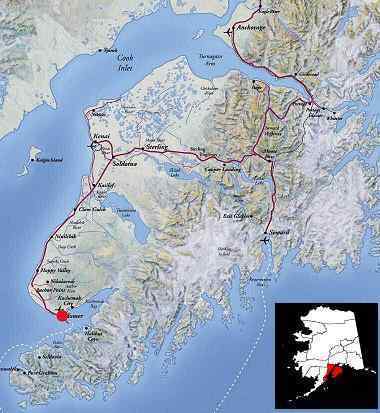