On Apr 15, 2002 the Zetas described as a Scripted Drama the steps in continent crunching and ripping apart that will occur during the hour of the pole shift, stating that Pre-Shift Quakes fall along those lines. Termed the Stretch Zone, those parts of the globe including the African Rift, rip because the plate cannot move and must therefore rip apart. In N America, the St Lawrence Seaway is a rip point.

Is there a correlation also to the earthquakes that occurred in Africa's stretch zone, the Rift area, on Dec 5? Indeed, as the Torque Effect on the Earth is increasing, tearing the Atlantic apart, twisting the North American plate into a diagonal with New England pulled East while Mexico is pulled to the West, dropping Africa into the Indian Ocean as the African continent is likewise pulled East while its tip is held firm near Antarctica, and sinking the western edges of Great Britain as the Atlantic Rift widens and stretches under the curve of the Earth so the land along the edges sinks.

In September 2005, the African Rift started to rip dramatically, and by March 15, 2005, this story hit the news with dramatic photos. 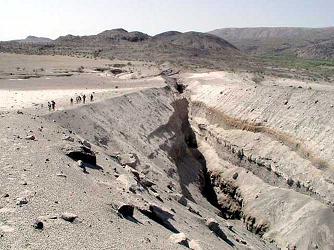 Normally new rivers, seas and mountains are born in slow motion. The Afar Triangle near the Horn of Africa is another story. A new ocean is forming there with staggering speed -- at least by geological standards. Africa will eventually lose its horn.

Geologist Dereje Ayalew and his colleagues from Addis Ababa University were amazed -- and frightened. They had only just stepped out of their helicopter onto the desert plains of central Ethiopia when the ground began to shake under their feet. The pilot shouted for the scientists to get back to the helicopter. And then it happened: the Earth split open. Crevices began racing toward the researchers like a zipper opening up. After a few seconds, the ground stopped moving, and after they had recovered from their shock, Ayalew and his colleagues realized they had just witnessed history. For the first time ever, human beings were able to witness the first stages in the birth of an ocean.

Normally changes to our geological environment take place almost imperceptibly. A life time is too short to see rivers changing course, mountains rising skywards or valleys opening up. In north-eastern Africa's Afar Triangle, though, recent months have seen hundreds of crevices splitting the desert floor and the ground has slumped by as much as 100 meters (328 feet). At the same time, scientists have observed magma rising from deep below as it begins to form what will eventually become a basalt ocean floor. Geologically speaking, it won't be long until the Red Sea floods the region. The ocean that will then be born will split Africa apart.